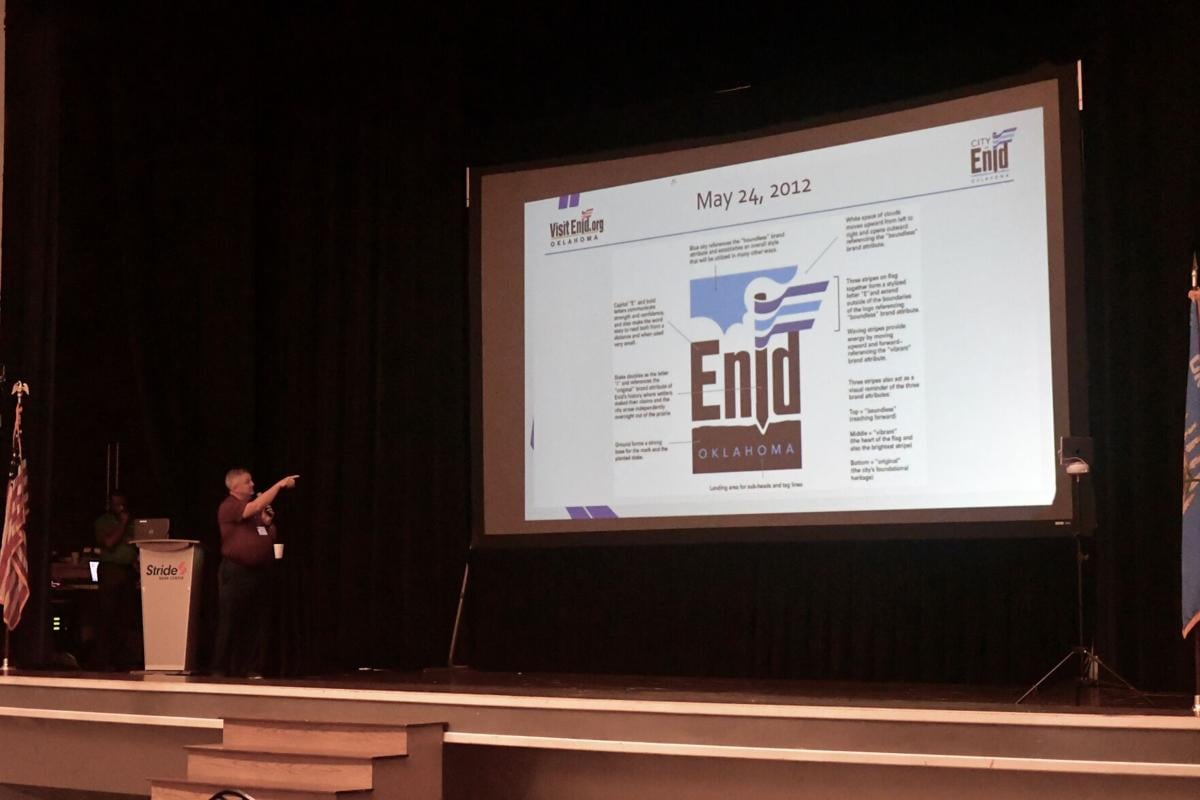 Visit Enid Director Rob Houston points to a presentation explaining the city of Enid’s logo, designed in 2012 by Michael Friesen, during the City Management Association of Oklahoma’s conference in Stride Bank Center on Wednesday, July 21, 2021. 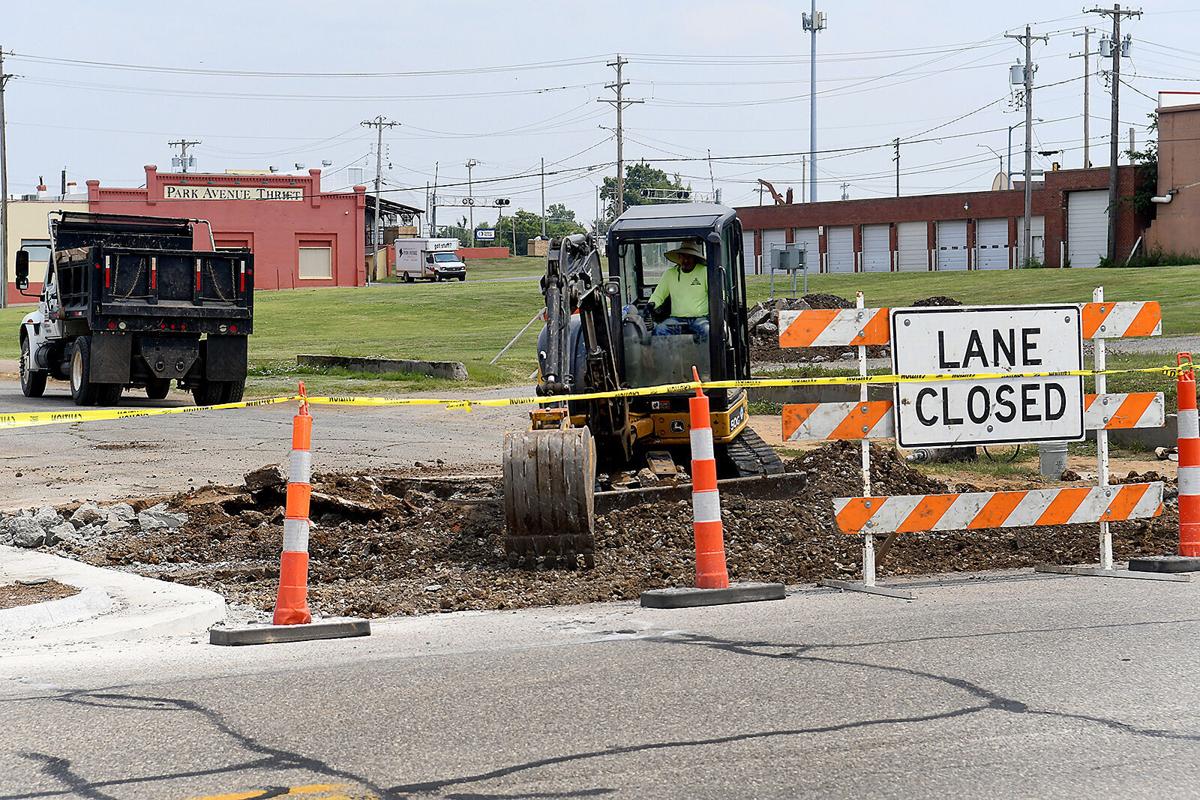 A construction worker digs up a section of West Park on Wednesday, July 21, 2021. The section of Park between Independence and Grand will be closed to allow crews to reconstruct the existing sidewalk street crossings. Work is expected to take four to six weeks to complete. 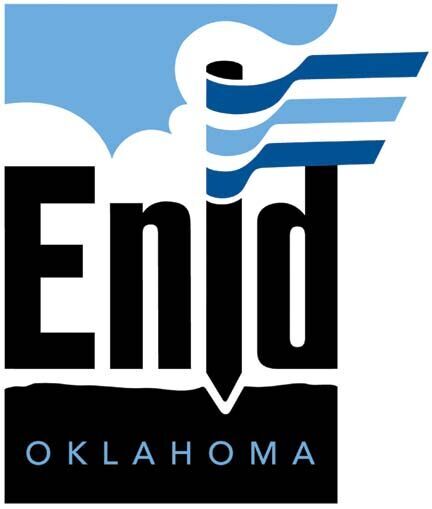 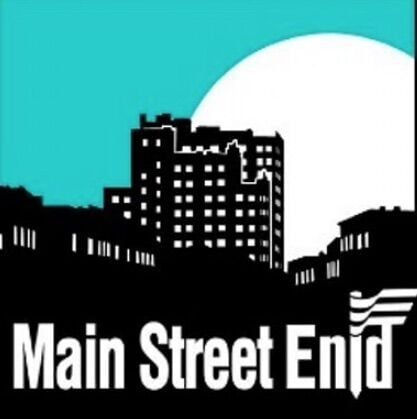 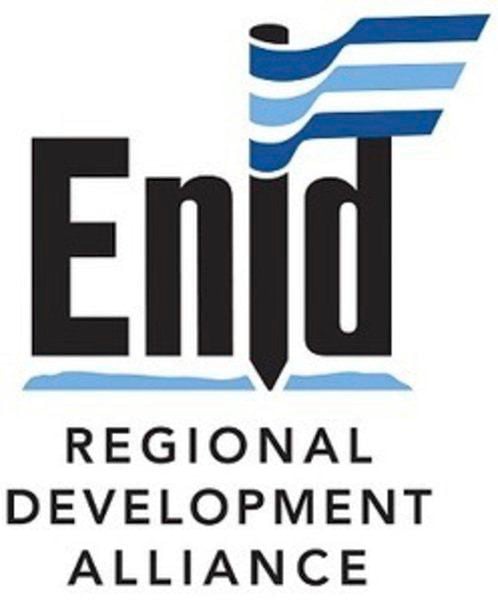 Through new projects, programs and events, the city has spent the last 10 years promoting itself as a “fun tourist destination” with an entrepreneurial spirit, Houston said.

“You can’t do it by yourselves,” he said from the stage of Stride Bank Center’s Grand Ballroom. “We all do things better when we’re doing them together.”

Many of the 100 city managers in attendance Wednesday afternoon said over a live survey response website that their cities hadn’t undergone major “rebranding” efforts in the last six to 10 years.

Around 80% also said their city organizations and departments had engaged in “turf wars” over similar marketing duties.

Enid began developing a new brand — a self-identified, marketable identity and personality — in 2010, after a consultant said the city didn’t have any specific reputation within Oklahoma.

After a year of taking visitor surveys and focus groups, as well as establishing the organization Enid First, the city of Enid unveiled a redesigned logo conveying three personality traits: boundless, vibrant and original.

Houston said 2012’s presentation at the newly renovated event center of the new city logo — now with a capital “E” and the “i” as the stake of a flag, whose three stripes billow off the frame — garnered a standing ovation.

As Enid developed a “branding book,” the city’s departments and the various city-affiliated organizations, such as Visit Enid, the Enid Regional Development Alliance and Main Street Enid, also received updated logos, which Houston said both reflected their different audiences as well as their shared purpose.

“We are doing our different ways of going out and trying to bring people to Enid,” Houston said. “But we are all in the same boat.”

This new era of community partnerships has culminated in downtown Enid’s popular ice skating rink, which counted over 10,000 visits this past winter south of Stride Bank Center, Houston said. Holidays on Ice was a partnership between the city, Visit Enid, Stride Bank Center, Main Street Enid and private sponsorship.

The rink is returning this November with a bigger rink and what Houston said would be a “pretty good-sized Christmas tree.”

Road work has begun on West Park south of the event center to make room for what’s expected to be the tree. Utilities for the tree will be installed on an easement on Grand, as approved Tuesday by city commissioners.

“Every team also needs leaders. … And city managers are the head coaches. They have the much tougher job (than elected officials),” Pankonin said.

The mayor had his own survey system Wednesday, instead asking the audience to raise their hands if they’d been to Enid before.

“Look at all those people,” Pankonin said when dozens of hands went into the air. “I think you’re going to see an ever-evolving Enid as you get a chance to look around during the visit this week.”

The city management conference continues Thursday and Friday at the event center, with social and networking hours planned in downtown.