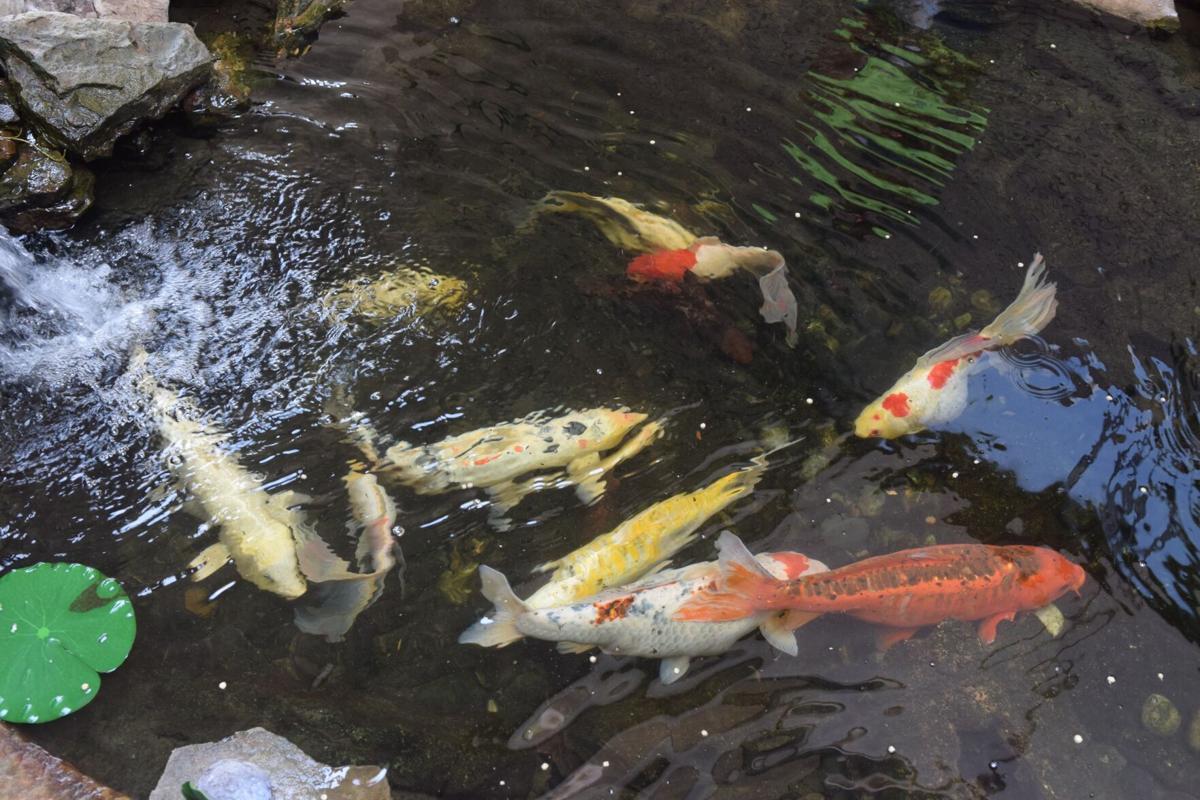 Several koi fish swim in the pond at the city of Enid administration building on Tuesday, July 13, 2021. 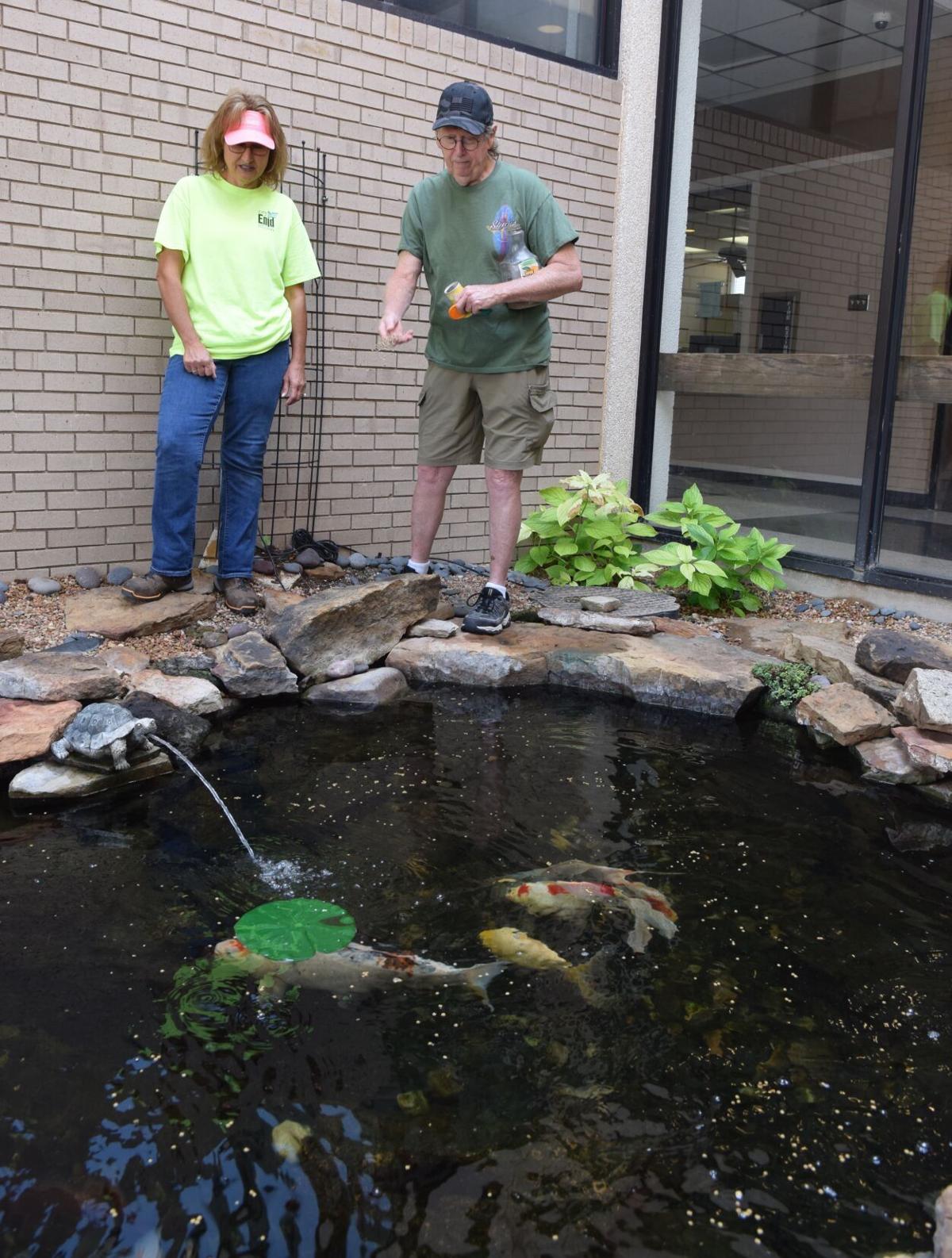 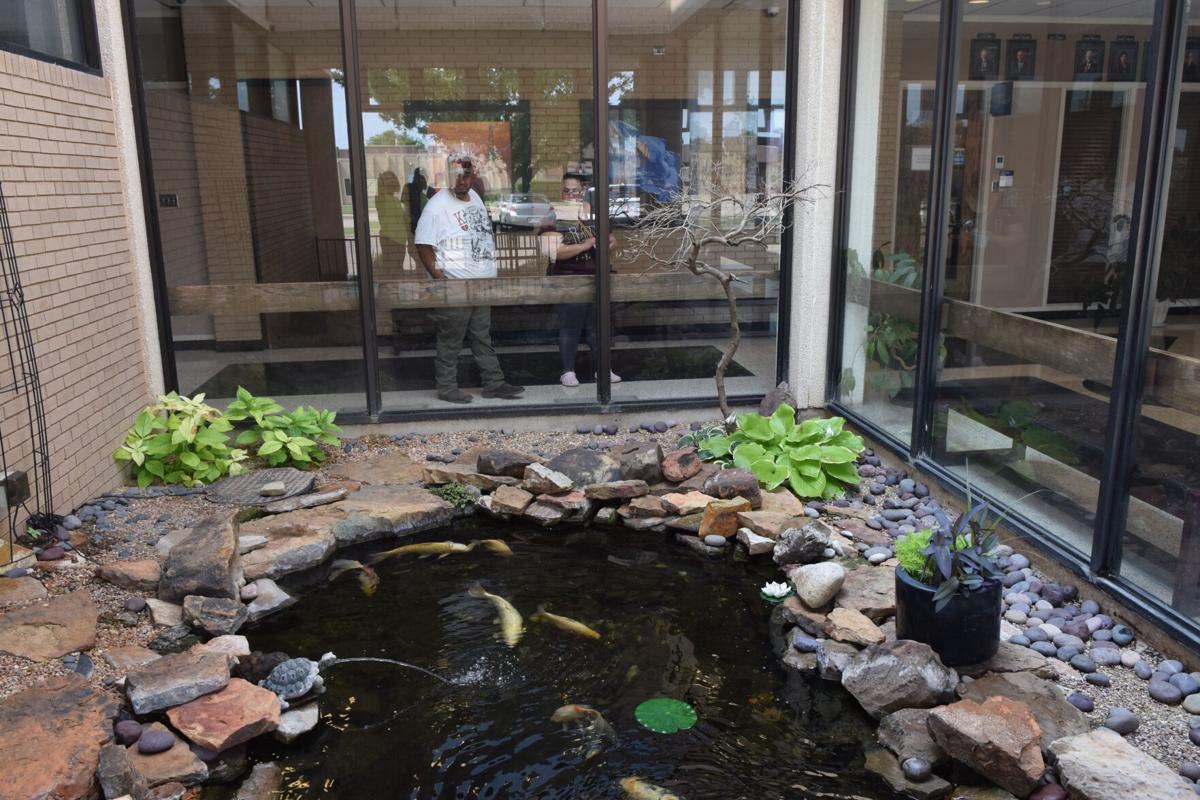 Visitors look at the koi pond from inside the city of Enid administration building on Tuesday, July 13, 2021.

Several koi fish swim in the pond at the city of Enid administration building on Tuesday, July 13, 2021.

Visitors look at the koi pond from inside the city of Enid administration building on Tuesday, July 13, 2021.

ENID, Okla. — Something fishy has been going on at Enid city hall.

And what’s more, staff at the city’s Utility Services Department have been acting koi about it.

For at least the last two decades, the west entrance to the city administration building at 401 W. Garriott has been overtaken by feet-long, multi-colored and scaly bottom-feeders.

A dozen koi of many colors, along with several darker babies called “fry,” spend their days swimming laps in the 8-by-12-foot pond surrounded by rocks, in a fenced terrarium that city crews installed at least 20 years ago.

Today, city staff from the Utility Services Department are the fish’s special caretakers, feeding them, changing the pond filters and monitoring the pond for pH levels, over-gassing and oxygenation all year long.

Clarence Wallace took care of the fish until he retired last year, after 29 years working for the city.

“You see people stop and stare at them all the time,” especially children entering the city building with their parents, Wallace said Tuesday standing along the pond’s fence.

Karen Hackett, another Utility Services worker, started taking care of the animals and the pond a year ago after Wallace passed the proverbial torch — specifically, the bottle of shrimp feed and another of koi pellets in a Simply Orange juice bottle.

“It isn’t in a job description,” Hackett said. “You just have to have a heart for it and just do it.

“They like me, but they miss their dad, is what I call him,” she added about her former coworker.

Wallace had taken over koi pond maintenance when his supervisor, Audrey Reed, retired 15 years ago.

One of the white fish was trained to come up to the surface and feed out of his hand. The fish, too, can remember their feeders and times to eat, according to several koi breeding and caretaking groups.

“They’re just leery,” Wallace said Tuesday after trying to feed them again, with the fish instead flocking to the other side of the pond.

"It isn’t in a job description (taking care of the koi). You just have to have a heart for it and just do it."

Nishikigoi — or “koi,” the common name for the vividly colored, domesticated variants of the wild Amur carp from eastern Asia — come in more than 100 varieties categorized into around 16 or 17 overall groups of colors, patterns and scales, according to the Japanese breeding group Kodama Koi Farm.

A hardy, cold-water species, koi can live as long as 50-100 years and hibernate in winter with minimal food.

The city’s group of koi include varieties of the most popular breed group, the Gonsanke. These include the Kōhaku (which are white-skinned with large red markings) and the Showa Sanke (black and red, with white markings). Another, an orange and white Butterfly koi, is currently growing its long, flowing fins, Wallace said, replacing another that died this last year.

An Ōgon, a metallic orange with “battle scars,” was named “Mr. Oakleigh” by Wallace’s granddaughter.

Reed told him she couldn’t remember what year they got the fish — but that the city had considered a flower garden until a woman in IT then suggested a fish pond.

After the city purchased five initial koi, Wallace said it “took off from there.”

As many as 32 fish at one time lived in the pond, he said, until he had to take some over to his wife’s work that also had a pond, keeping his favorites at city hall.

“I would have a pond if I had a place to put it,” he said, having spent the years learning more and more about the koi. “My house, I’m running out of room.”

Is there someone you think we should know about? Please send nominations and contact information to callen@enidnews.com.