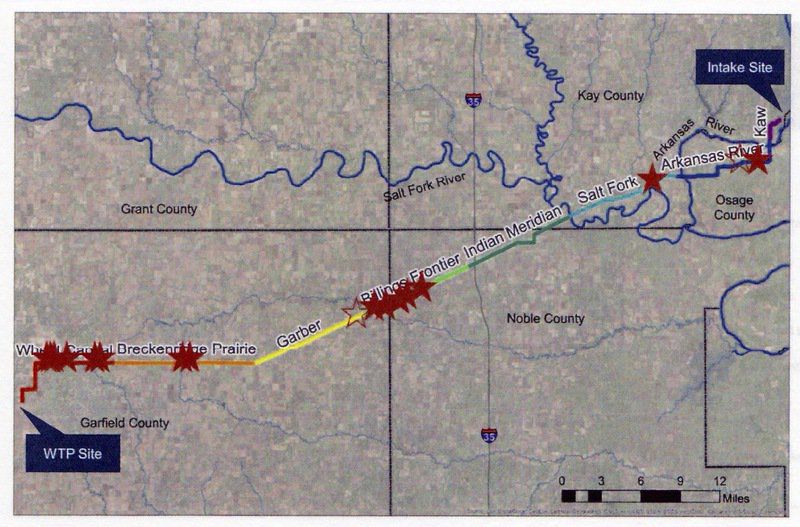 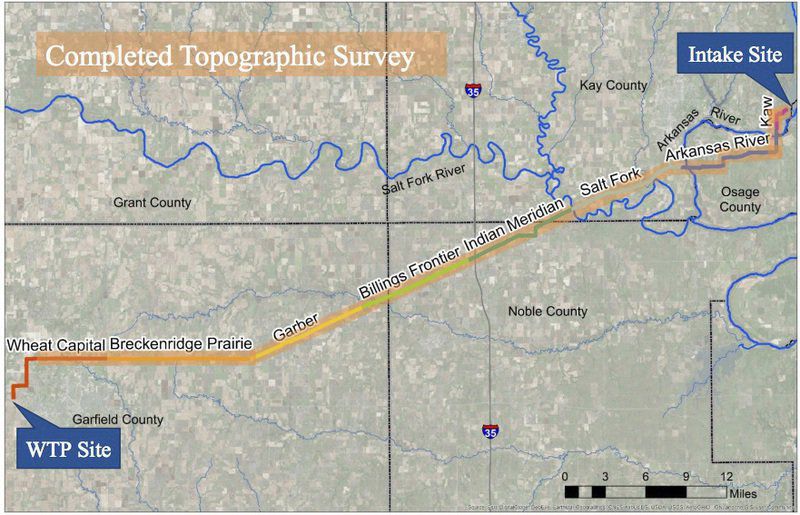 ENID, Okla. — The city of Enid is closing in on several critical hurdles for the Kaw Lake Water Pipeline Project, some high, some low, each capable of hindering the $315 million effort, or worse.

The 70 miles of planned pipeline, stretching from Kaw Lake to a future water treatment plant in Enid, crosses 230 parcels of land. Two parties, a single individual accounting for a single parcel, the other several individuals accounting for multiple parcels, could not agree on terms with the city of Enid, Gilbert said.

“It’s a difficult choice, we didn’t come to it easily,” he said. “We worked with those owners, particularly one of them, for probably at least a year, maybe more.”

The city declined to identify the property owners or entities, or the precise locations of their impacted properties along the planned route.

At last count, 99 parcels had accepted easement offers, agreements reached allowing the pipeline on and through the properties, with financial compensation in return to their respective owners.

Gilbert’s own home happens to be in the path. The pipeline will cut across his front yard.

The remaining parcels out of the 230 total are expected to follow suit, and the owners now slated for eminent domain are thought to be the only holdouts in the pipeline’s path.

One owner has no interest in allowing a 36-inch underground pipeline through their property near Ponca City, money doesn’t seem to move them and they’ve stopped responding altogether, the city said.

The other group, with multiple parcels in the path, has been “negotiating for terms that I do not believe we can accommodate,” Gilbert said.

Much effort has been spent negotiating with the holdouts, said Gilbert, and there’s really nothing left to say. But before the city can pursue eminent domain, it needs approval from commissioners. Gilbert said the legal action could be up for a vote as soon as Dec. 17, the next city commission meeting.

“People have property rights, and we respect that,” Gilbert said. “We’re happy the law has a remedy for that, that is fair to owners and a government entity like ourselves that’s only trying to put in a water utility to benefit tens of thousands of people.”

Nearly $2.4 million has been spent on easements so far, according to the city. That figure will continue to grow in the coming months as more easements are accepted.

These holdout properties potentially impede the city in more ways than one.

The city needs all 230 parcels free and clear for construction in order to receive a $200 million loan from the Oklahoma Water Resources Board, a lynchpin investment without which the pipeline cannot proceed.

Actual construction of the Kaw Lake pipeline is planned to begin in early 2021, and wrap up in 2023, with a budget of $250 million.

If the city can’t find resolution with every piece of private property along the 70-mile route, it will likely cause problems, according to the engineering company hired to design the project.

“This is still the highest risk to the schedule ... because if we don’t have all of our easements, it makes it very difficult to secure that loan,” Michael Graves, vice-president of Garver LLC, told commissioners in November.

Confident in the “legal remedy,” Gilbert said the city should have the $200 million Water Board loan by mid-year 2020.

“There’s no guarantees in this world, especially in the financial world as volatile as it is, but the program that the Water Board has is very stable and it’s tried and true, and Enid’s been a longtime customer,” he said.

In addition to his commissioner’s post, Stallings also serves on the Water Board, and so recuses himself on any matters that conflict between them.

“The city has been talking to the Water Board since the inception of this project ... so they’ve been aware of it the whole way,” Stallings said.

“I can’t guarantee you that they’ll get the loan, but it’s a very, very high probability.”

It will take years to pay off the debts. Based on current figures the city estimates payments will end in 2052, if it allows for a minimum of $10 million budgeted each year for capital expenditures, like roads and sewer lines.

“I don’t know that I would say it’s tightening the belt, it’s having a laser focus on the cost of the pipeline and how it’s going to be financed over 30 years,” Gilbert said, adding that budgeting $10 million for capital expenditures is close to what the city does now.

To date, a total of $24,477,668 has been spent on the Kaw Lake water project, according to the city accounting department.

“I’ll be honest with you, if the number comes in a dollar beyond what we said we can afford, then we have to go back and we have to re-evaluate,” Ward 4 Commissioner Jonathan Waddell said.

The $315 million figure isn’t just the estimated total cost for the endeavor, it’s the most the city decided it would be comfortable spending.

“That number was it, so going beyond that means we’re going to lose someplace else. We would have to make a decision about if we’re going to cut the budget in some other area in order to make this happen,” Waddell said. “We’ll have to address that as it comes, but as it stands right now the number we’ve set is the number we’ve set, and I wouldn’t want to go beyond that.”

The city wants a second opinion on price, more experts at the table crunching numbers so they can be double sure that the number they’ve been pointing to is accurate.

In January, the commission will vote to hire a construction manager-at-risk (CMAR), which will be able to provide that second opinion.

If the CMAR calculates $315 million or lower, the city would continue moving ahead, and the CMAR would be in charge of the build.

Top candidate is Garney Con­struction. Operating nationwide, the company specializes in constructing all aspects of water utility projects, from the source to the delivery point.

Garney has completed 186 water and wastewater projects regionally, in Oklahoma, Texas, Kansas, Louisiana and Arkansas, according to the company’s director of central U.S. pipe operations.

Garney will take a look at the design framework Garver engineering has created, and determine their estimated cost independently.

“That’s when we’re going to come to a point where we figure out whether or not we can afford this,” Waddell said, adding that the decision to follow through on the pipeline “isn’t necessarily a done deal, because we have to make sure the numbers are right.”

Personally, Waddell believes in the project. But a line has been drawn and he doesn’t want to move it, so it’s a dilemma he’d rather not face.

“It would be a hard thing to stomach ... a lot of our economic development projections are tied to having water, having a sustainable water source, and multiple of them,” he said.

Enid’s current water supply, just as it is, isn’t enough, Waddell said. He wants enough flowing in for what Enid could be, but likely won’t be, if that new source isn’t tapped.

“If we don’t position ourselves in the proper way ... then we miss out on opportunities to bring good jobs and better jobs to the community.”

There are other options than Kaw Lake that “aren’t as palatable,” or as effective, or as much of a long-term solution, he said, but they wouldn’t be cheap, either.

The city would have to see about getting new wells, and putting money toward infrastructure needed for the wells Enid already does have, he said.

There would be a cost for those alternatives. Maybe not $315 million, or more, or less, as the case may be, but sustainability is going to be an investment however it’s achieved.

As he sees it, the best bet for Enid’s future is 70 miles to the northeast.

This story has been updated to clarify details regarding the land owners with parcels impacted by the water pipeline project.

Willetts is education and city reporter for the Enid News & Eagle.
Have a question about this story? Do you see something we missed? Do you have a story idea for Mitchell? Send an email to mwilletts@enidnews.com.