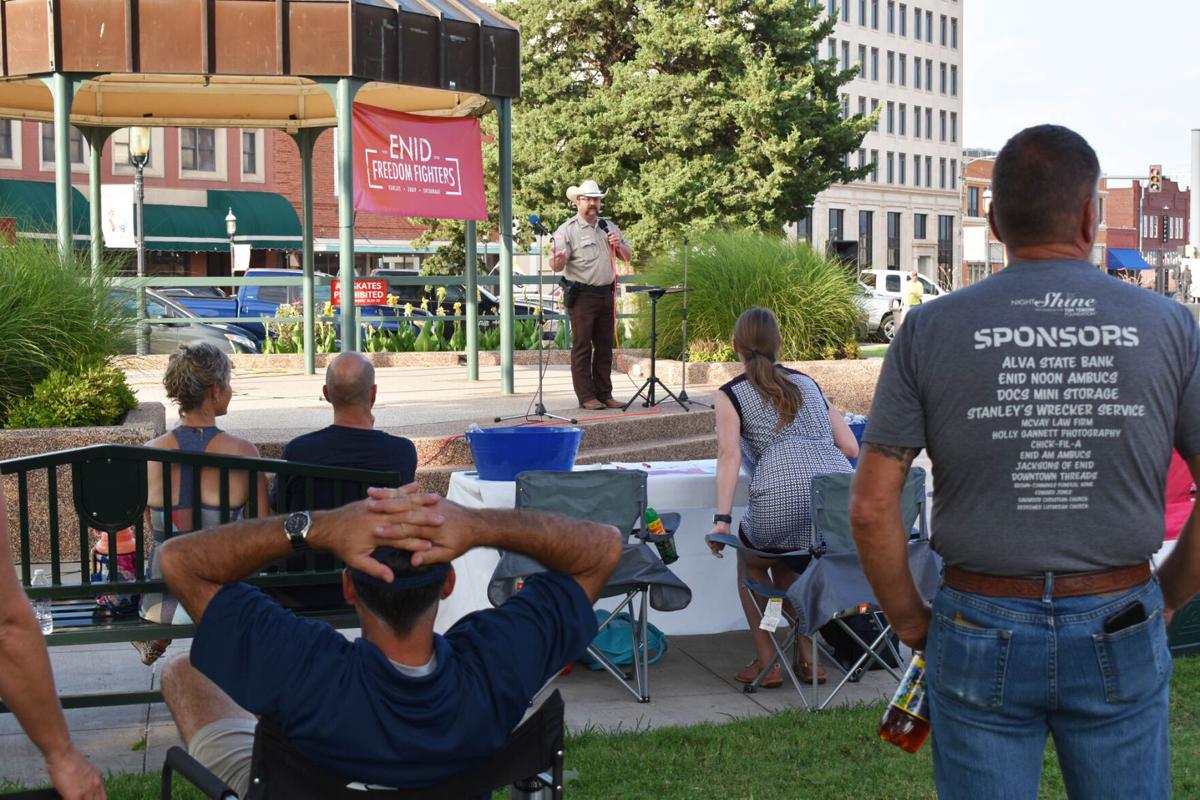 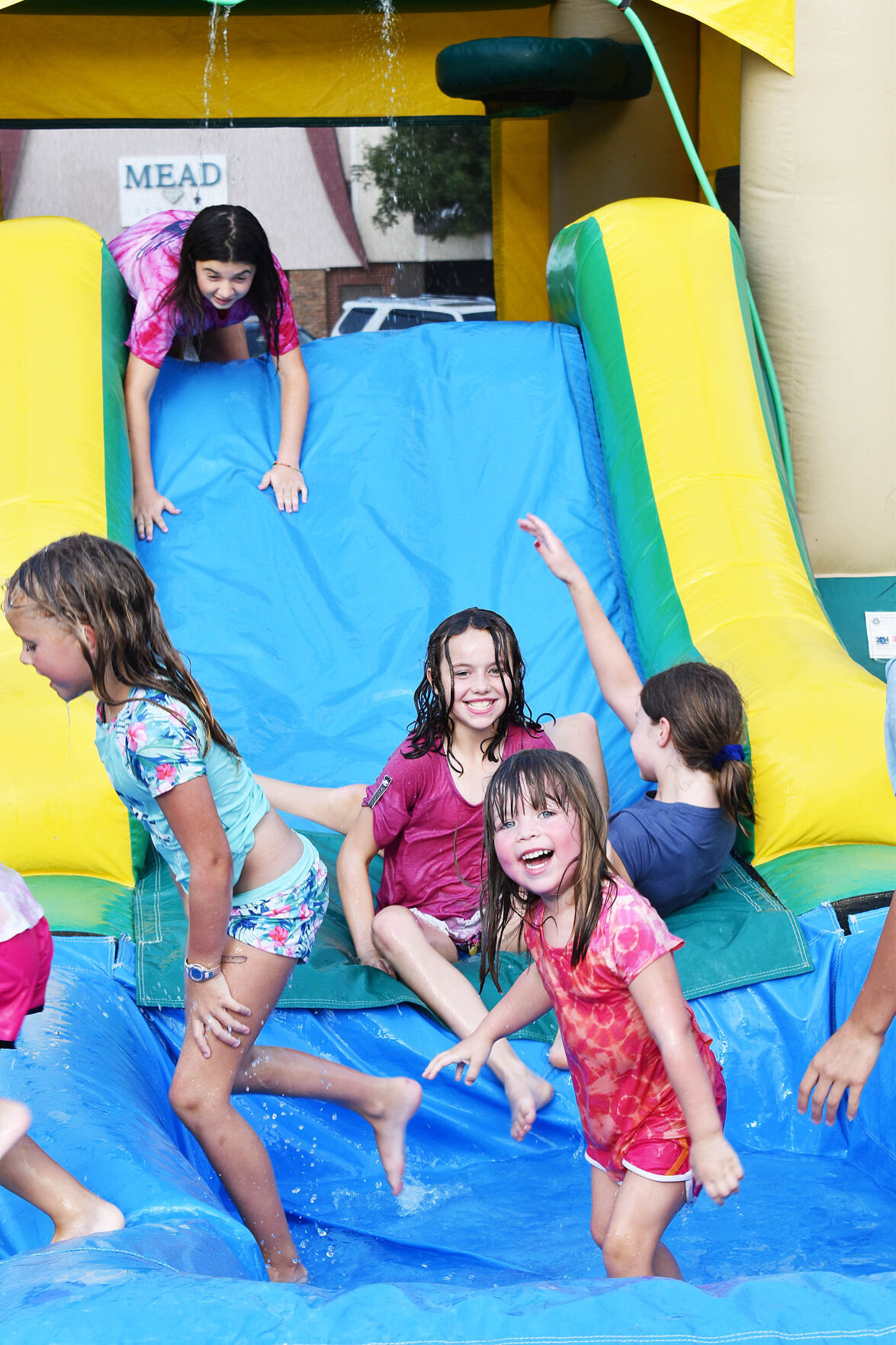 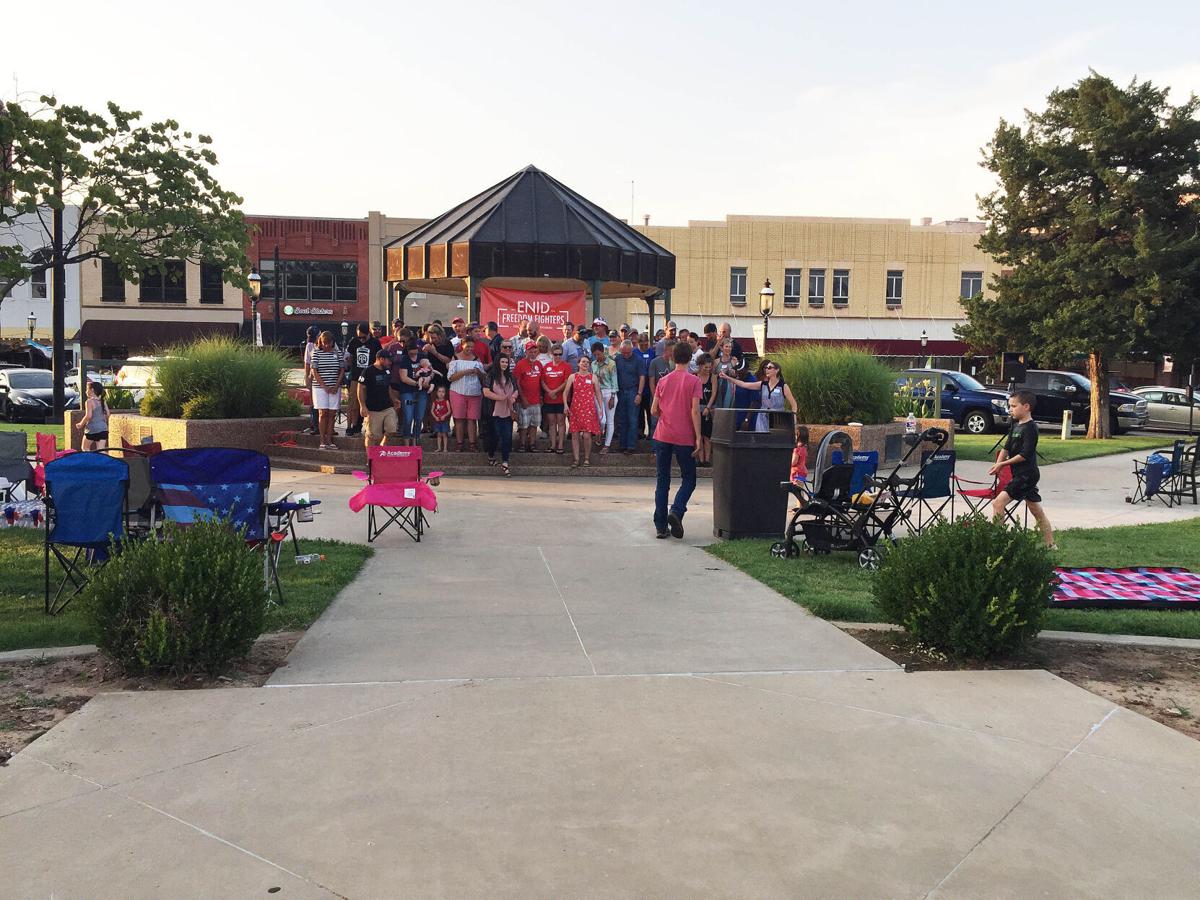 Some of those attending the Enid Freedom Fighters Birthday Celebration pose for a group photo in downtown Enid Saturday evening.

Some of those attending the Enid Freedom Fighters Birthday Celebration pose for a group photo in downtown Enid Saturday evening.

ENID, Okla. — Many of the 75 to 100 Enid Freedom Fighters who gathered downtown Saturday evening thought they were alone last summer, but a year later they came together to celebrate what they have accomplished.

“In the last year I have gone from thinking I was the one, the only one, fed up and willing to speak out to being part of a movement in Garfield County and Enid, Oklahoma,” said Brian Hacker to the group at the Courthouse Gazebo Saturday during the EFF Birthday Celebration.

The group formed a year ago as part of a grassroots effort when Enid City Commissioners began talking about a mask mandate during the COVID-19 pandemic in mid-July.

“We had just been texting for people to show up, and to our surprise, 275 people showed up,” said Melissa Crabtree. “We were just a whole lot of people who cared and wanted to be a part … who wanted to have a voice.”

Crabtree — who said Enid Freedom Fighters is “just a group of people” and there are no titles — led the group to form a Facebook Page where they could communicate not only their like-minded Christian, conservative ideals but about how they could affect change in the community.

Within a couple of months, the group’s Facebook Page ballooned to more than 1,000 members and grew gradually from there to top out at about 1,300 a year later.

Crabtree said a core group of those attend face-to-face meetings regularly and want to educate people to get involved in politics and their community to be able to produce change.

Speaking to those gathered Saturday, she reminded them EFF has been instrumental in the election of three of its members to the city commission in wards 3, 4 and 6, and that it has representatives on the Enid school board, library board, Public Arts Commission of Enid, Vance Development Authority and the state ADA committee and board of education.

“We’ve gotten people on board,” Crabtree said while speaking more in-depth about the group’s accomplishments Friday afternoon during an airport layover in Denver as she was traveling back home. “And all along we’ve been educating, just helping to stir people to action.”

In addition to Crabtree and Hacker, speakers at Saturday’s event included Garfield County Sheriff Cory Rink, Enid City Commission Keith Siragusa, Oklahoma GOP field operational director Brian Hobbs and Enid businessman Kyle Williams, who urged those attending to come to a special announcement Monday morning that will detail an event set to bring thousands of people. Williams said it all will be announced at 10 a.m. south of Stride Bank Center.

On Saturday families and friends attending gathered in groups on the warm evening, sitting in lawn chairs and blankets, eating food truck fare while they listened to those speaking and their children enjoyed bouncy houses provided for the event.

Hacker spoke out against what he called the GOP establishment excluding members who “don’t fall in line” with what they want and encouraged the EFF members to continue to be inclusive.

Hobbs, who ran for House District 38 in 2018, said losing that race reinforced his determination to be involved in local and state politics.

He started going to the Capitol and meeting people who connected him to the position he holds today in the state GOP.

Hobbs said when President Trump asked Americans to come to Washington, D.C., in January, he was one of those who answered that call. He said he was awed at the amount of people packed around the Capitol and that it was a positive scene as far as he was concerned at the time.

“People outside had no idea what was going on inside,” he told the EFF members Saturday evening.

He said he only learned of the break-in to the Capitol from social media on the way home.

Dealing with some fallout from that time, Hobbs said he has stuck by his beliefs and urged the EFF members to do the same.

“Get involved,” he said. “Get excited and be ready to take some arrows … This is the Alamo for us.”

City of Enid Ward 3 commissioner, Siragusa said a lot of the divisiveness at the city level is gone now and they have positive change coming.

Rink spoke about freedoms that are being protected in Garfield County, and that his department is working through some issues of concern in the area, mainly, he said, the marijuana grow farms.

The sheriff said while on the outside these appear to be legal, his department is concerned that they are working illegally in some instances and also that drugs are being filtered through the Mexican border and finding their way into Oklahoma.

Speaking on the pandemic that brought Enid Freedom Fighters together with the mask mandate issue, Rink told the group that anyone who feels like they are being forced into a COVID-19 vaccination has the freedom to choose.

“If they come onto your land, call the sheriff’s department,” he said.

What the future holds

Crabtree said on Friday that the mask mandates was the one issue that spurred involvement but not the only reason for the group. It was an impetus, she said.

“Our goal is to stay involved, and that is determined by what is happening in the city.”

The group created a mission, she said, to “Encourage our city leaders through involvement, Educate ourselves on the issues of our city and Equip ourselves to positively contribute to local politics.”

She said members will continue to “walk along with the city boards and commission,” pairing open board positions with those in EFF with similar interests and look ahead to city elections next spring.

“The way we were formed is that people were not involved,” Crabtree said, “and that is not only in Enid, that is true across the nation.”

“City politics are not sexy, they are fairly boring. We try to help them see the importance and stay engaged.”

The very construct of the group is that it is always involved, she said.

Sandie Hamilton, a member of EFF, agreed, saying she wants to have a say about what is happening in her community.

She said she was drawn to the message of the group during the mask mandate fight.

“There are plenty of reasons to wear a mask and there are reasons not to, but the fact they were taking that choice away from us just bothered me,” Hamilton said.

She said it feels good to know she is not alone in her ideals.

When the events of July 2020 occurred, Crabtree said she was fairly new to Enid, but she has built a lot of friendships through this group. “We’re trying to build a community that enjoys being involved — that wants to be involved.”

She realizes there will be ebb and flow among the members as time goes on, but that core mission of “Encourage, Educate and Equip” will remain.

“We keep doing what matters, and at the end of the day, they have to make their own decisions.”