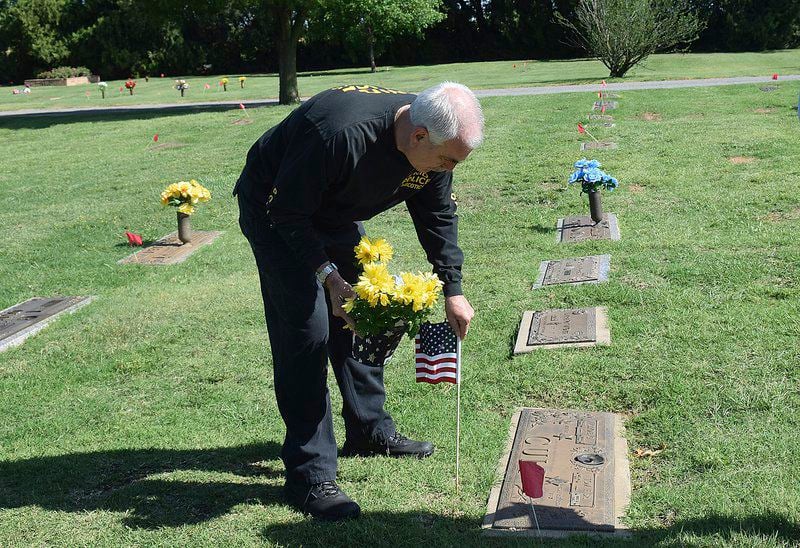 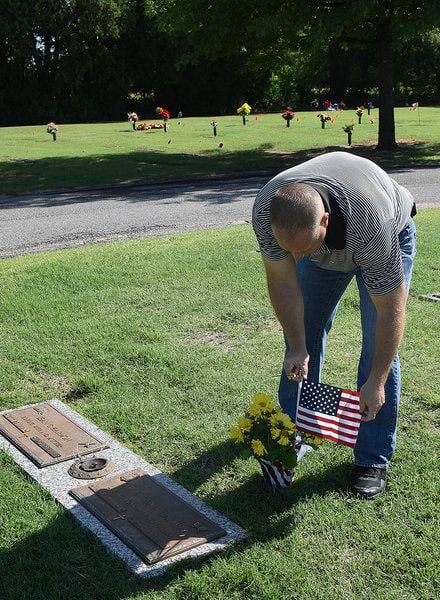 ENID, Okla. — Stepping over fallen limbs and circumventing puddles, members of Enid Police Department spent Friday morning at Enid Cemetery and Memorial Park Cemetery to honor those who served before them.

Chief Brian O'Rourke, Capts. Scott Miller, Bryan Skaggs and Ryan Singleton, Lts. Dustin Albright, Greg Gordon and Randy King, Sgt. Nick John and maintenance manager Joey Breeze met at Jumbo Foods West for a donation of mums and miniature American flags to place on the graves of more than 40 former officers. Mums also are given to the families of officers who are not buried at either cemetery.

The origins of the tradition of placing flowers on the graves of former officers the Friday before Memroial Day is unknown, but is is one that has continued for at least 40 years.

"It's a solemn occasion," O'Rourke said. He said it was time for others in the department to honor those who came before them.

The chief said he knows a lot of the names, some of whom he worked with when he first began as a patrolman.

John said this was his fourth year to participate in the tradition.

"Every year, it's an honor to do this," he said. "These officers served the Enid community. It's the least we can do to honor their service. Everyone takes honor in doing this."

Rains is police and court reporter for the Enid News & Eagle. Follow him on Twitter, @cassrains.
Have a question about this story? Do you see something we missed? Do you have a story idea for Cass? Send an email to crains@enidnews.com.