ENID, Okla. — All Enid Public Schools students will continue with distance learning after Thanksgiving break, as the number of new daily COVID-19 cases in Garfield County topped out at an average of 72.5 per 100,000, according to the Oklahoma State Department of Health Friday.

Oklahoma saw a gain of 2,921 new COVID-19 cases, 26 of those in Garfield County, with 15 more deaths reported statewide on Friday, according to the OSDH. The 1.8% rise in Oklahoma’s cases brought the overall total to 167,261 since the virus was confirmed in the state in March.

EPS board members voted early in the school year that the district will go to distance learning for two weeks when OSDH’s risk map shows the county with more than 50 daily new cases on a seven-day average, with a seven-day lag, which happened for the first time last Friday.

Enid schools began distance learning on Monday through the week-long Thanksgiving break. With the average still well more than 50 on Friday, schools will be out the week following the break, as well.

“EPS will continue to conduct virtual distance learning districtwide. During that time period a deep cleaning for all school facilities will also take place,” said Enid Superintendent Dr. Darrell Floyd. “We will continue to monitor COVID numbers to determine future plans and future procedures, but as it stands right now the earliest date of returning to in person instruction would be Monday, December 7.”

Every county in the state was considered at moderate, or “orange,” risk for COVID-19 on Friday, according to OSDH. Oklahoma State School Board Association has adopted a map that puts a county in “red” after the 50 average daily new cases per 100,000 is met, but OSDH uses those average cases plus hospital census and ventilator and personal protection availability as triggers for that designation. 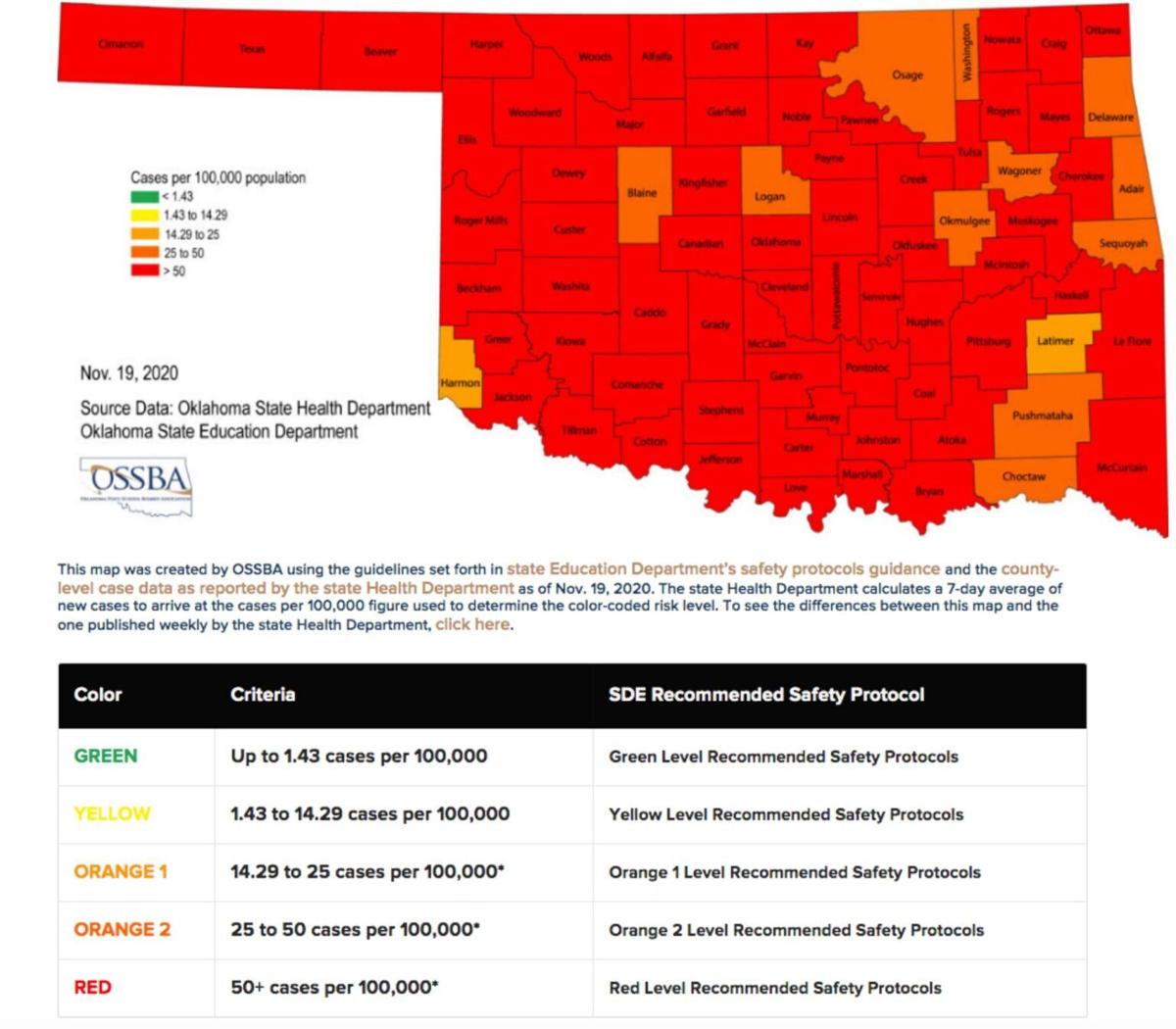 The district will not serve meals next week during Thanksgiving break, Nov. 23-27, but will resume distribution of meals 11:30 a.m. to 12:30 p.m. during the week of Nov. 30 to Dec. 4. Families can drive through the pick-up line between the Central Kitchen, 519 S. Washington, and the Administrative Services Center, 500 S. Independence, or at Waller Middle School, 2604 W. Randolph. Meals for students younger than 18 will be on a table for patrons to pick them up. Students must be in the vehicle.

Quarantines from close contact (defined by the CDC as 15 cumulative minutes within 6 feet) account for 90% of the 297 students and staff currently affected by COVID-19. The district on Friday reported 31 individuals in isolation for testing positive, 25 of which are EPS staff members.

Most of those positive transmissions occurred out in the community, while quarantines mostly occur from close contacts at school, Maggie Jackson with the county Health Department said Monday.

“EPS is working closely with health professionals and relies heavily on their guidance because they are the experts,” district communications director Jane Johnson said in an email Thursday. “The district will continue to follow their advice, and in an effort to be transparent with the families, staff and stakeholders, I place the counts on the spreadsheet based on what the individual schools report to me.” 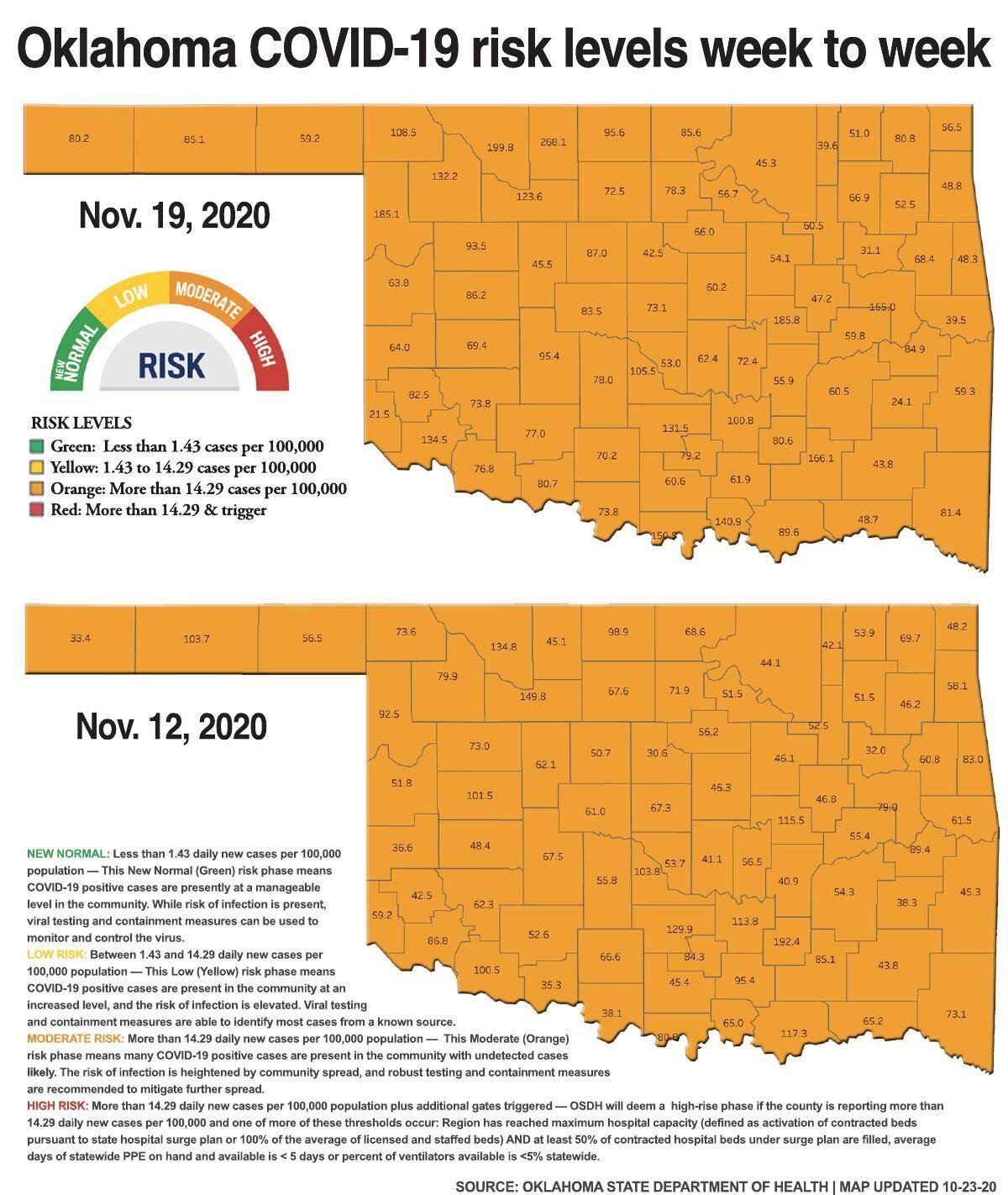 State Health Commissioner Lance Frye several weeks ago called this seven-day average, along with hospitalizations, the more accurate indicators of the coronavirus in Oklahoma, rather than more lagging counts of deaths or daily cases.

There have been 1,603 Oklahomans who have died either due to COVID-19 or from complications of the virus, according to OSDH.

Twelve of the deaths reported Friday were in the 65 and older age group: two Tulsa County women, a man and a woman from Oklahoma County, men from Beaver, Caddo, Jackson, Kay, Rogers and Seminole counties and women from Pottawatomie and Seminole counties. There were two deaths in the 36-49 age range: two men in Marshall and Pontotoc counties. The OSDH also reported the death of a Garvin County man in the 50-64 age group, according to OSDH.

Adult ICU bed availability in the state was at 6% and medical/surgical beds were at 13% availability statewide, with a 99% hospital response rate, according to the OSDH Executive Report on Friday evening. That same report shows the Northwest region for OSDH with 76 cases, a single-day decrease of seven, and 12 persons under investigation for the virus.

Northwest Oklahoma county case increases on Friday also included 25 in Woodward, 13 in Kingfisher, eight in Woods, seven in Grant, six each in Alfalfa and Major, five in Noble and four in Blaine, according to OSDH.

Case gains in Northwest Oklahoma cities and towns included 27 in Enid, 21 in Woodward, five each in Alva, Fairview and Helena, four each in Hennessey and Medford, three each in Kingfisher and Pond Creek, two each in Cherokee, Fort Supply, Goltry, Okeene and Woodward and one each in Aline, Canton, Cashion, Cleo Springs, Mooreland, Watonga and Waynoka.

There have been 87,507 Oklahoma women and 79,605 men who have tested positive for COVID-19, according to OSDH as of Friday. There were 149 designated as unknown gender.

Data shows deaths in 71 of Oklahoma’s 77 counties, with 272 in Oklahoma County; 248 in Tulsa County; 118 in Cleveland County; 61 in Rogers County; 44 each in McCurtain and Washington counties; 42 in Creek County; 38 in Delaware County; 35 in Wagoner County; 33 in Garfield County; 29 each in Caddo and Muskogee counties; 28 in Comanche County; 26 in LeFlore County; 25 each in Canadian, Jackson and Lincoln counties; 22 each in Kay, Ottawa and Pottawatomie counties; 21 in Pittsburg County; 19 in Grady County; 18 each in Bryan and Osage counties; 17 each in Beckham, Mayes, Okmulgee and Payne counties; 16 in McClain County; 14 in Sequoyah County; 13 each in Adair, Carter, McIntosh, Okfuskee and Stephens counties; 11 each in Custer, Garvin and Texas counties; 10 each in Cherokee, Pontotoc and Seminole counties; eight in Greer County; seven in Hughes County; six each in Haskell, Kingfisher, Kiowa, Pushmataha and Woodward counties; five each in Pawnee, Roger Mills and Tillman counties; four each in Choctaw, Johnston, Murray, Noble and Nowata counties; three each in Cotton, Grant, Latimer, Logan and Marshall counties; two each in Beaver, Blaine, Craig, Harper, Jefferson, Major and Washita counties; and one each in Atoka, Dewey, Love and Woods counties.

There were 621 inmates and 169 Department of Corrections employees testing positive for COVID-19 across the state as of Friday, according to the DOC website.

• Kingfisher with 773 cases, 645 recovered, 122 active and six deaths, three from Okarche, two from Hennessey and one from Kingfisher;

• Grant with 187 cases, 145 recovered, 39 active and three deaths, one each from Deer Creek, Medford and Wakita.

OSDH has officially reported 33 deaths both in Enid and Garfield County, but there also was one death reported from Lahoma, which is near the county line for Major, where no deaths have been recently reported by the OSDH. The discrepancy is being investigated by the Health Department, OSDH spokesman Anthony Triana said.This story is developing and will be updated.

BREAKING NEWS on the COVID-19 threat and its impact is available at https://www.enidnews.com/virus and is free for all readers.

•• All breaking news is fully accessible on the Enid News & Eagle website.

Get full-access breaking news via text alerts at https://enidnews.com/textalerts.

•• Information also can be found at https://coronavirus.health.ok.gov/ and https://www.cdc.gov/.