ENID, Okla. — Oklahoma reported more than 1,200 COVID-19 cases in a single day for the first time in months, according to Oklahoma State Department of Health on Wednesday.

OSDH’s weekly numbers — which OSDH acute disease service reports to the CDC — on Wednesday showed Oklahoma has 7,454 confirmed deaths, a weekly increase of 37, though the CDC/NCHS’ Provisional Death Count, which is based on death certificates and is OSDH’s primary reported number, placed the overall count in Oklahoma at 8,677 deaths, a weekly increase of 23, in which the coronavirus was the cause or a contributor.

There have been 300 hospitalizations in the past week, bringing the total to 27,575, and according to OSDH’s Situation Update, there is a three-day average of 391 total COVID-19 hospitalizations — including 26 pediatric hospitalizations — an increase of 132 since last week. Of those, 131 are in the ICU, across the state.

Of the county’s 139 deaths, 128 have been in Enid, according to OSDH city data, with five in Lahoma, one each in Drummond, Fairmont, Garber, Covington and Waukomis, and one not listed by town. Deaths listed by ZIP code on the OSDH website show Enid with 126 deaths.

Other Northwest Oklahoma county case increases in the past week included 14 in Noble, 10 in Kingfisher, nine in Woods, four in Grant, three in Blaine, two in Woodward and one in Major. No cases were reported in Alfalfa County.

One death was reported in Woodward and Kingfisher counties.

Much of eastern Oklahoma turned “orange” this week as a majority of central and western Oklahoma stayed in the “yellow” or “green” categories for OSDH’s COVID-19 Risk Level System.

According to the COVID-19 Risk Level System, which is released every Wednesday, 32 of Oklahoma 77 counties are in the moderate, or “orange,” risk level; 38 are in the low, or “yellow,” risk level and seven are in the new normal, or “green,” risk level.

Garfield County saw green on May 12 for the first time since OSDH began releasing county risk level trends and dipped into the “yellow” risk level on June 23. This week, Garfield County reported 4.9 cases per 100,000. 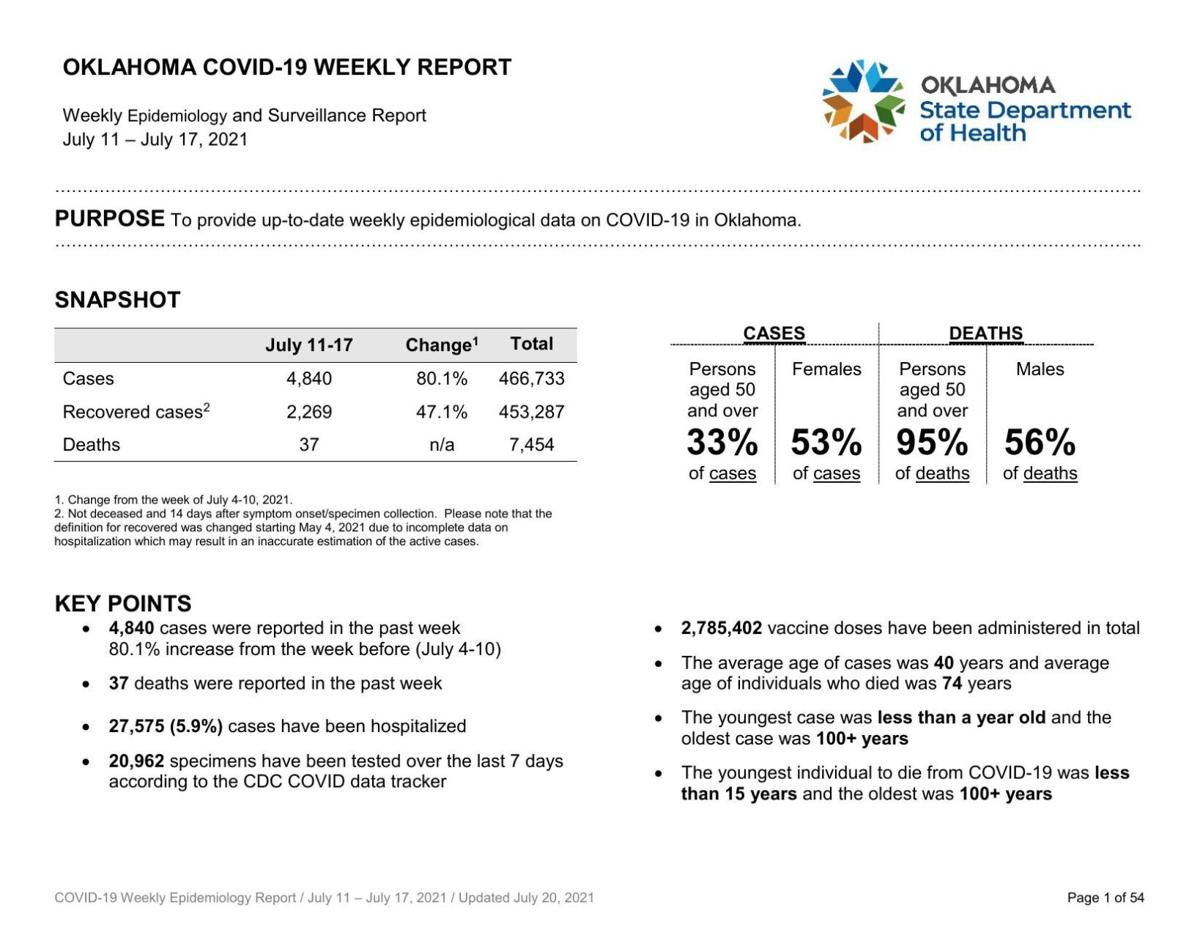 COVID-19 cases saw an increase of 80.1% in the numbers of reported cases compared with the previous week, according to OSDH’s Weekly Epidemiology and Surveillance Report, which is released every Wednesday.

OSDH reported 33% of the cases were people aged 50 and older, and 95% of the deaths were in that same age group.

COVID-19 patient hospitalizations remained at 5.9% statewide in a week-to-week comparison. Since the first case was confirmed in Oklahoma in March 2020, the number of admissions to state hospitals was at 27,575, according to the report.

According to OSDH, 40.3% of people 12 and older in Garfield County have completed the series, along with 73.5% of those 65 and older who have also been fully vaccinated.

• Kingfisher with 2,073 cases, 2,020 recovered, 11 active and 42 deaths, 21 from Kingfisher, 12 from Hennessey, four from Okarche — which Kingfisher shares with Canadian County — two from Dover and three not listed by town.

• Alfalfa with 1,156 cases, 1,148 recovered, one active and seven deaths, with city data listing three from Carmen, two each from Aline and Helena and one each from Cherokee and Jet. City data encompasses rural towns that could include those residing in neighboring counties, which could cause the discrepancy.

• Major with 957 cases, 932 recovered, one active and 24 deaths, 17 from Fairview, two each from Cleo Springs and Ringwood and three not listed by town.

• Grant with 551 cases, 543 recovered, one active and seven deaths, three from Wakita and one each from Deer Creek, Lamont, Medford and Nash.

BREAKING NEWS on the COVID-19 threat and its impact is available at https://www.enidnews.com/virus and is free for all readers. That includes information on closings and cancellations.

•• All breaking news is fully accessible on the Enid News & Eagle website.

Get full-access breaking news via text alerts at https://enidnews.com/textalerts.

•• Information also can be found at https://coronavirus.health.ok.gov/ and https://www.cdc.gov/.

Kelci McKendrick is police and court reporter for the Enid News & Eagle.
Have a question about this story? Do you see something we missed? Do you have a story idea for Kelci? Send an email to kelcim@enidnews.com.