This story has been updated with comments from local business owners, Commissioner Jeff Funk and included a PDF of the current declaration.

ENID, Okla. — City commissioners will consider extending Enid’s current mask mandate through April, in an attempt to continue minimizing the transmission of COVID-19.

The draft proposal commissioners will vote on Thursday is unchanged from from the current mandate commissioners passed in a near-unanimous vote Dec. 1 — aside from extending the expiration date to midnight April 30.

All ordinance provisions, exemptions and enforcement policies will remain the same. 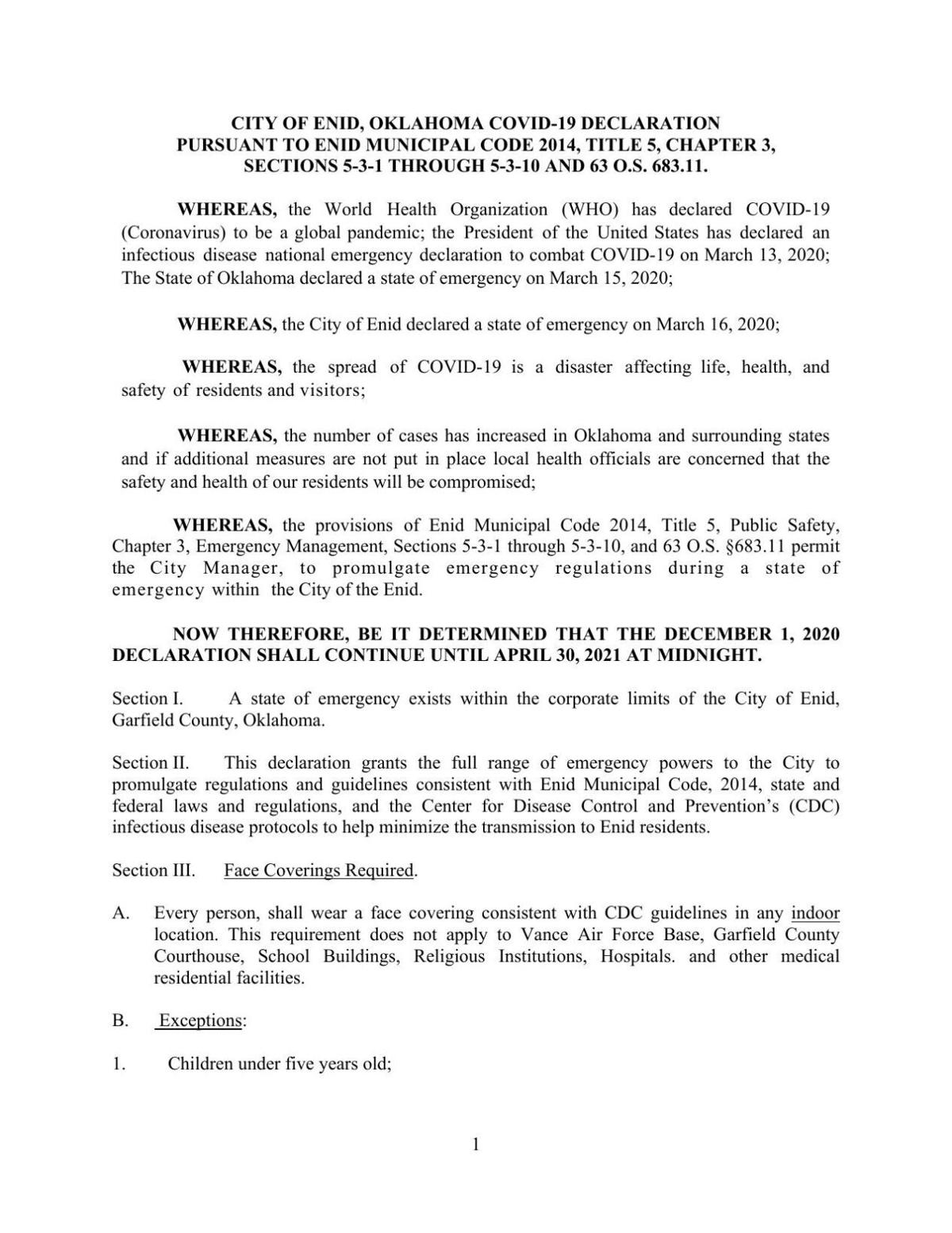 Under both the current and proposed declarations, people in Enid currently must wear a face covering consistent with Centers for Disease Control and Prevention guidelines in any public, indoor location.

Several exemptions are listed online, including children under 5, people eating or drinking, people in their own homes or those of companions or family members, a person in an office with the door shut and public safety personnel.

This requirement does not apply to Vance Air Force Base, Garfield County Court House, school buildings, religious institutions, hospitals and other medical residential facilities. Vance and Enid school district currently have their own mandates in place, as do Enid’s major medical facilities.

Thursday’s commission meeting, set for 6:30 p.m. in the Stride Bank Center’s Grand Ballroom, is the commission’s last regularly scheduled meeting to vote to extend the mandate before it expires at 11:59 p.m. Feb. 28.

There is no penalty for specifically violating the ordinance — if reported to Enid police, violators instead are and would continue to be subject to trespassing, disturbing the peace or other similar offenses.

Police Chief Brian O’Rourke said, “so that’s the way that was based, is that we’re going to be reactive to business owners and people and issues.”

So far only one trespassing offense has been reported, at Suddenlink Communications, EPD spokesperson Cass Rains said Wednesday. The first offense is a warning, so no citation was issued. 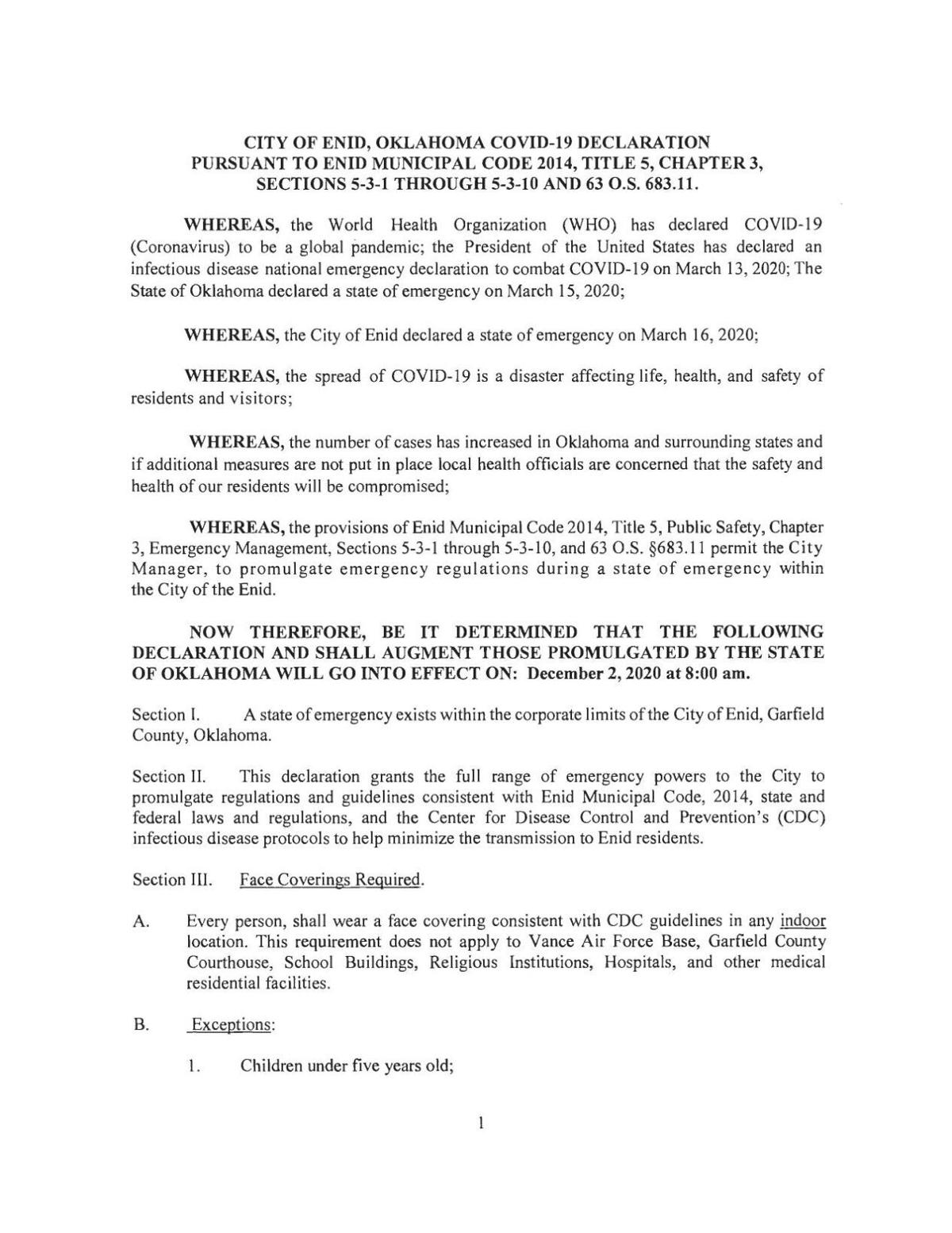 To avoid causing a scene or losing potential business, enforcement “can be awkward” for the businesses left to do it themselves, said Rebecca Kroeker, who owns ATS Counseling Focus Institute in Enid.

The counseling agency requires visitors to wear masks and offers any to people without one, but Kroeker said it comes down to a person choosing to wear a one or not. ATS has two waiting rooms if someone without a face covering doesn’t comply with social distancing.

“Because we want to make sure our clients have a comfortable (and safe) environment, it is very tricky,” she said.

Bobbi LaValley said most of her customers at her business, Bobbi’s Mattress Barn, prefer not to wear one — and neither does she.

LaValley said she believed wearing one should be a choice for the person, depending if they believe they are effective or not.

“Covid (sic) is here with or without (a) mask,” she said in a Facebook message. “My father is in a nursing home and I haven’t been allowed to see him in almost a year. That’s a bigger issue than masks.”

Katie Kittel, who owns a pet-sitting and care service in Enid, said if she were to mandate masks at her facility, she thinks she would lose clients.

Kittel also said at her facility, she leaves wearing a mask up to her customers, almost all of whom decline to wear one. She still cleans and disinfects after each visitor, she said.

Kittel said she treats wearing a mask in clients’ homes as a “simple politeness same as taking on/off your shoes in someone’s home,” and most of her clients don’t mind if she doesn’t wear one, she said.

“I am entering their home as a pet sitter. That is their space — their family. I abide by their rules in their environment,” she said. “I just feel that with politeness, our society is still wonderful and safe, rather than just negative thoughts for my fellow citizens.”

Ward 3 Commissioner Ben Ezzell in December proposed an alternative mandate with fines for specifically not wearing a mask; commissioners passed the first option instead. He said he still would vote to extend the ordinance.

Ward 4 Commissioner Jonathan Waddell said he believed strengthening the ordinance with more enforcement provisions was unlikely, either in the new draft or with proposed amendments.

He added this also was likely due to political pressure on commissioners, attributing to his landslide loss last week to his consistent support of some form of mandate.

Requests for comment were not returned from leaders of the Enid Freedom Fighters, the citizens’ group most vocal in its opposition to a city mandate since a first proposal was considered back in July. The group led a recall petition against Ezzell and endorsed the candidates who won all three city commission elections on Feb. 9.

"Because we want to make sure our clients have a comfortable and safe environment, it is very tricky (to enforce masks)."

Waddell had previously said he would resign from the commission when his successor, Commissioner-elect Whitney Roberts, tells him she’s ready to take office ahead of budget discussions, but he said Tuesday he would not do so before Thursday’s meeting.

In a comment on a News & Eagle Facebook post about business owners’ thoughts on the mandate, Roberts said she does not enforce mask wearing at her business, photography studio MotoPhoto. If a customer requests wearing one, she said she and her staff will do so.

Ward 6 Commissioner Jeff Funk, who was appointed in January, said he also intended to step down in the coming months before his successor, Commissioner-elect Scott Orr, was sworn into office in May. The two spoke last week about Funk doing so following key city management decisions, he said Wednesday night.

Funk did not say whether he would vote to extend the mandate. Funk replaced David Mason, who was the mandate’s sole nay vote in December and resigned for unrelated reasons later that month.

Ezzell said he would not resign before Ward 3 Commissioner-elect Keith Siragusa and the rest of the new commissioners are sworn in.

The effectiveness of the city’s current mandate — in lowering the rate of community spread of COVID-19 — has been difficult to measure.

Daily new cases specifically in Garfield County have largely been trending down for the last several weeks.

However, Waddell said that trend could be due to any number of factors: the cold weather keeping people home or inside, an uptick of people wearing masks, more being vaccinated, fewer being tested or just more having already had COVID-19.

Waddell also said he believed the county Health Department has been focusing more of its staff efforts on vaccinations rather than testing.

“There’s a lot of factors that no one’s really studying, so there’s never gonna be an answer for that,” he said of the case trend in Garfield County.

On Dec. 3, two days after the mandate was passed, the county was reporting an average 75.8 daily new cases.

Requests for comment from OSDH or the county were not immediately returned by Wednesday.

Statewide, mask mandates have been primarily implemented in densely populated metro areas, according to the state’s most recent epidemiology and surveillance report on the subject, for the week of Jan. 8-14.

In these areas that adopted a mandate in November, from Nov. 1 through Jan. 12, the percentage change of the seven-day average number of new daily cases was at 292%, compared with 155% in “no mask” areas per 100,000 population.

But from December through January, all communities in Oklahoma experienced a jump in cases — the major difference being the percentage of new cases in cities that adopted a mandate before October, 157%, was nearly half of that of cities that adopted ones in November.

These higher percentages could be due to the higher populations, according to the report.

“If urban populations have rates at or below those of less populated areas, it is likely that mitigation efforts are having a beneficial impact,” the report read.

The weekly report on COVID-19 hasn’t included analysis on the impact of mask mandates since the week of Jan. 15-21.

“I think (the mandate) has helped a little, but I don’t see as much compliance as I see in Tulsa,” where she splits her time, she said. “I think that when you have buy-in from the top down, there is more compliance.”