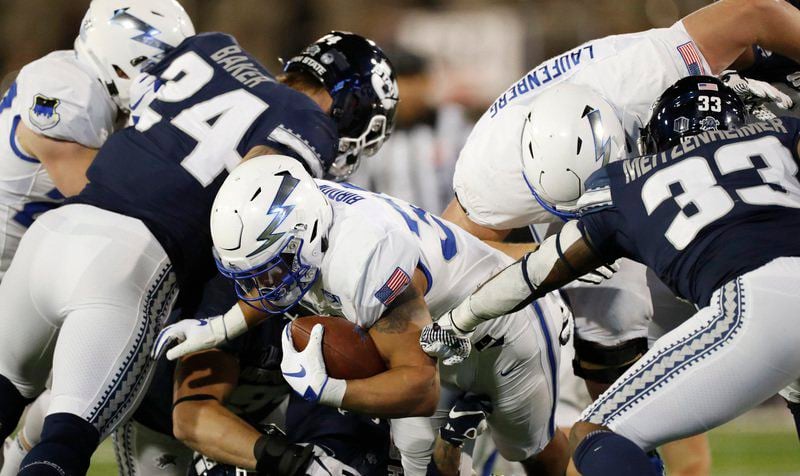 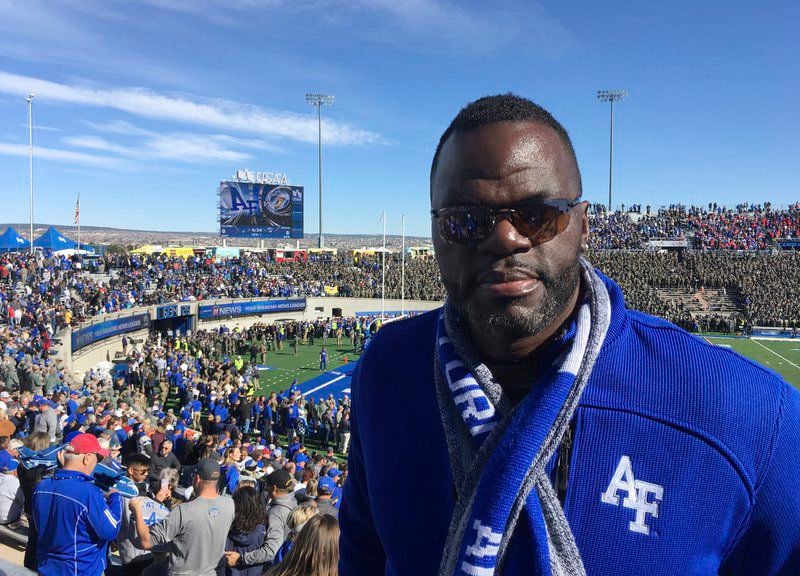 In this Nov. 2, photo, Jermaine Birdow stands at Falcon Stadium, where he watched his son, Air Force running back Taven Birdow, and teammates play Army in an NCAA college football game at Air Force Academy, Colo. Jermaine Birdow, who was released from jail last November after serving a long sentence stemming from a 2001 home invasion, was able to see for the first time in person his son play in a game. (AP Photo)

In this Nov. 2, photo, Jermaine Birdow stands at Falcon Stadium, where he watched his son, Air Force running back Taven Birdow, and teammates play Army in an NCAA college football game at Air Force Academy, Colo. Jermaine Birdow, who was released from jail last November after serving a long sentence stemming from a 2001 home invasion, was able to see for the first time in person his son play in a game. (AP Photo)

AIR FORCE ACA­DEMY, Colo. (AP) — Like many fathers and sons, the Birdows tossed the football around the yard.

They imagined the setting being the backyard on freshly cut grass — not the cracked asphalt inside a prison yard where they were. They tuned out the barbed-wire fences and the watchful eyes of the guards.

It was on these days that young Taven Birdow might daydream of playing in college just like his father, who, in those precious moments, was reliving his time as a linebacker for Oklahoma State University in the 1990s.

Jermaine Birdow was no longer No. 33 in your program but No. 463462 in Oklahoma’s state prison system — serving a long sentence for a 2001 home invasion.

It was also on these days he might daydream of seeing his son — now a senior fullback at Air Force — play in person for the first time. That happened on Aug. 31 against Colgate, when Jermaine was in the stands as Taven took the field in the number he used to wear.

The moment was even better than he imagined.

“To see his last name on the back of his jersey, playing for the United States Air Force for the first time?” said Jermaine, who has attended every game this season following his release last November after more than 17 years in prison. “I was awe-struck.”

Taven was 3 when his father was jailed for his role in a home invasion in Oklahoma City. Jermaine ended up pleading guilty to charges that included robbery with firearms, pointing a firearm at another, kidnapping for the purposes of extortion and first-degree burglary.

His sentence: 37 years (later commuted to 20 with the help of his legal team).

As a kid, Taven and his mom, Jamie Rodrigues, would visit his father as often as they could and at whatever prison he happened to be housed. Jermaine was locked up in a dozen or so different Oklahoma prisons during his incarceration.

Rodrigues always made sure Taven’s father played a big part of his life. The routine, though, was taxing: School and practice for Taven, work for her, and then long drives for weekend visits.

On the visits, the father and son would sometimes throw the football around (if there was one). Or play hoops (if they were permitted). Or make up obstacle courses (trash cans for hurdles). Or just talk across a table.

But they always envisioned they were beyond those walls.

“I was pretty good as far as creating an atmosphere of, ‘You’re not here in this prison. You’re just here with your dad,’” said Jermaine, who resides in Enid, operates a lawn service and gives motivational speeches at churches and schools. “It was always the presence of just us that made the time greater.”

Sometimes, Taven and his mom would travel three or more hours for a visit only to be turned away because of ever-changing rules or surprise facility lockdowns.

Their bond was enhanced through sports. Taven played baseball, wrestled and ran track. Of course, there was football as he helped Altus High School win a 2015 state title.

No bitterness toward dad. Taven attributes that to his mom, who always included his father in decisions. She grew up without a father and wasn’t going to let that happen to Taven.

One strict rule: Grades came first. No exceptions. And if Taven got into trouble, his mom made him call his father.

Jermaine weighed in throughout Taven’s college recruiting process. He was a standout football player himself in high school, before suiting up for Oklahoma State. He pushed Oklahoma or Oklahoma State.

Taven blazed his own path at Air Force.

There was a tough conversation, though, over Christmas break following his sophomore season. Taven was thinking of stepping away from football. When he told his mom, they drove to Tulsa, where his father was incarcerated, so the three could have a heart-to-heart chat.

“His dad was saying, ‘I’m getting out, and I’ve never seen you play football. I’ve always wanted to be there for a game,’” his mom recalled. “Taven broke down. It’s the first time I’ve ever seen him break down. He said, ‘You should’ve been there in high school.’ We both lost it. We realized how much he internalized on a constant basis. We had no idea, because he’s the most humble person I’ve ever known.”

In August, dad got to see him play in person. Taven even had a season-long 41-yard run in that game against Colgate.

“First time I cried in a while,” the 43-year-old Jermaine said.