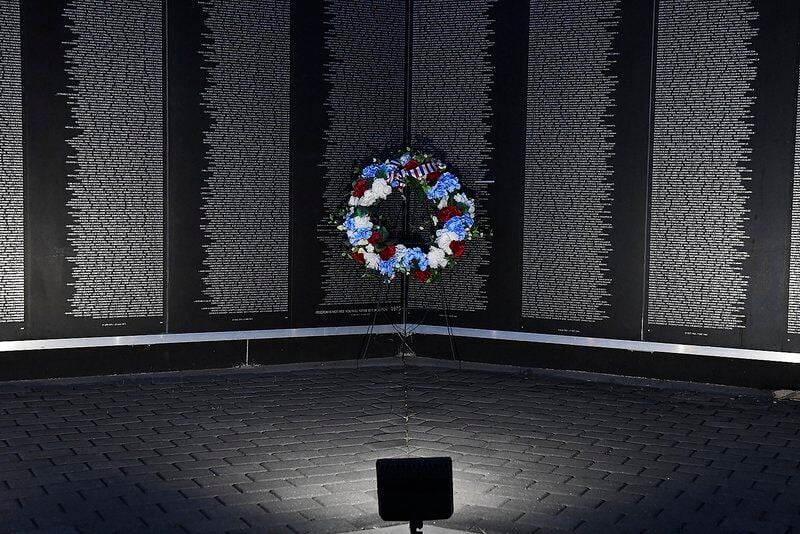 A wreath is shown during a Memorial Day ceremony at the Vietnam Memorial Wall at the Woodring Wall of Honor and Veterans Park Saturday. (Billy Hefton / Endi News & Eagle) 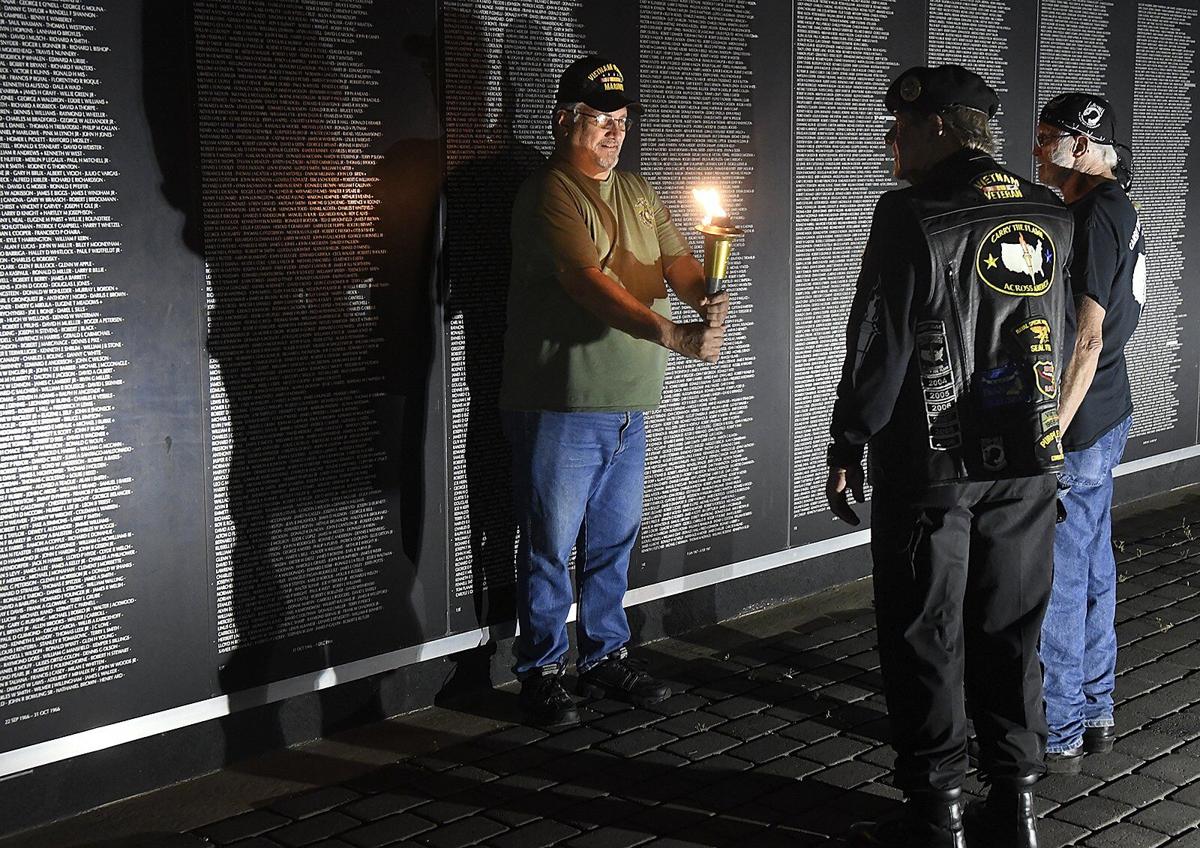 Tommy Hicks holds the Flame of Rememberance during a ceremony at the Vietnam Memorial Wall at the Woodring Wall of Honor and Veterans Park Saturday. (Billy Hefton / Endi News & Eagle)

A wreath is shown during a Memorial Day ceremony at the Vietnam Memorial Wall at the Woodring Wall of Honor and Veterans Park Saturday. (Billy Hefton / Endi News & Eagle)

Tommy Hicks holds the Flame of Rememberance during a ceremony at the Vietnam Memorial Wall at the Woodring Wall of Honor and Veterans Park Saturday. (Billy Hefton / Endi News & Eagle)

ENID — This year’s Memorial Day celebration hosted by Woodring Wall of Honor and Veterans Park was broadcast online this year due to the COVID-19 pandemic.

The ceremony was broadcast on the group’s Facebook page and featured many of the same attributes as the in-person event, minus the honoring of four fallen servicemen. Those four will be honored during next year’s ceremony.

Woodring Wall of Honor and Veterans Park board Vice President Coni Blankenship began this year’s presentation by welcoming those who logged in to the event.

“This year, 2020, we honor all people who served in our armed forces with a special emphasis for fallen heroes of Oklahoma,” she said. “We remember and recognize our veterans who faced the horrors of war and especially those who gave up their lives in service to the nation. They and their families deserve our highest praise and eternal gratitude.

“We remember and salute all fallen heroes today and thank their families for their ultimate sacrifice.”

She said special services for four fallen heroes would be held next year and hopefully with the community able to be in attendance.

“It is important to make all Americans aware of the contributions and sacrifices of their armed forces to those veterans and gold star families that have given us a meaningful part of your lives,” Blankenship said. “You should know that as community and nation, we recognize what price you paid.”

Blue Star Mothers Chapter 11 President Brenda Bingham spoke of the sacrifices made by American servicemen and servicewomen, and why Americans should continue to remember and honor them today.

“We are mothers of military men and women who serve our country. We are only given that honor by our sons and daughters who have chose to be in the service,” she said. “We are there to support them in any way we can.

“At this time of the year, we come to gather for Memorial Day. We do this because of the fallen. We want to honor and remember them,” Bingham said. “All moms are Blue Star Mothers, whether their sons served in the war in Korea, or Vietnam, or Desert Storm or even Iraq and Afghanistan.”

Bingham explained the transition a family’s star takes when a loved one is lost.

“The blue star turns to gold because you have lost your son or daughter in action, or in an accident,” she said. “It is sad, and I would like to be able to hand the families their gold star flags, their gold star to hang in their windows so every time someone drives by that they know this family has lost a loved one.”

Rep. Chad Caldwell, R-Enid, the keynote speaker of the event, asked those watching the ceremony to remember the sacrifices made by those being honored this Memorial Day.

“Today, we’re gathered at the site of our state’s most stirring memorial to honor the legacy of our veterans. It is a place of remembrance for all veterans and for those who fought in our wars, for those who served in times of peace and for those who are part of the current 9/11 generation,” he said. “I listened to a speech once that said no one dies a moment too soon, that not one life is cut short. The defense of this argument is the Lord knows how many days, hours, minutes and seconds that He’s allotted to each one of us. The Scripture tells us that He knows the number of our days. I guess that should be a comfort to us, to think the Almighty knows us so well and welcomes us to our eternal home at just the right moment.

“That means, for the men and women we come to honor on Memorial Day, He knew the exact moment each one would take their last breath, fight in their last fight. He was there the moment their life on this earth ended,” Caldwell said. “But the death of a loved one still comes with heartache and grief for those left on this side of Heaven. Family members can only image what their lives would have been like had they chosen a different path or answered a different calling. Would they have married, how many children they would have had, or what career they would have chose? But let us leave such imaginations today.

“Today, we remember those who did choose a life of service to their country. Service to their fellow countrymen. Those who did answer a higher call,” he said. “We bring flags and flowers and memorial wreaths to hallowed ground where quiet reigns. We say prayers and play ‘Taps.’ We speak of valor and honor, but what we’re really saying is ‘Thank you.’ Thank you for a life well lived, short as it might be. Thank you for taking on a service that would eventually cost you everything. Thank you for exhibiting the greatest love, the kind that lays down it’s life for others. This is a holy sacrifice and a debt that we can never repay.

“And yet, we must at least offer tribute,” he said. “Memorial Day isn’t just about honoring veterans. It’s about honoring those who lost their lives. Veterans had the fortune of coming home. For us, that’s a reminder when we come home we still have a responsibility to serve. It’s a continuation of service that honors our country and those who fell defending it.”

“The reason part of the wall means so much to me, there’s so many names from the year I served in Vietnam, in 69 and 70, especially one name here, Harry Underwood,” he said. “He was my RTO (radio telephone operator). He was shot down as close as I am to him right now in the middle of the day, a bright gorgeous day. He shouldn’t have even been beside me, ‘cause he was carrying my radio, he should have stopped, but he walked with me. And they opened up on us and he was dead when he hit the ground. The next day he would have been out of the jungle going to a motor pool.

“So, that’s one of my worst days in Vietnam.”

Woodring Wall of Honor and Veterans Park board member Steve Niswander said his father served during World War II, he served during Vietnam and his son was currently serving in the Army.

“I joined the Wall of Honor board as a family tradition,” he said. “It’s an honor to represent those who have fallen, who have given their lives to give us freedom so we can enjoy this country.”

A bell-ringing ceremony honored all 31 Oklahomans still listed as missing in action from the war in Vietnam.

Woodring Wall of Honor and Veterans Park board member Jack Wagner spoke about the importance of the Wall of Honor.

“The reason I am here, and I want everyone to be aware that this is out here at Woodring Airport, the Wall of Honor. It’s very important that we keep the awareness in our community, the community of Enid,” he said. “We have Vance Air Force Base. They need to be aware that we really support them, look up to them when they are in uniform. Say thank you for serving our country.

“What we’re trying to do on this Memorial Day is show that freedom is not free. It took a lot of blood. You can look on the Vietnam Wall. All these crosses here are people that died from Oklahoma since we opened this place in 2000,” Wagner said. “It shows you the cost of having your freedoms and liberties by living here in America. It’s a great place to live.

“Never forget those who have served.”

Russell led another prayer, which was followed by a message from Gov. Kevin Stitt.

“On this Memorial Day, we take time to recognize that the freedoms we enjoy today come at a costly price. Since the beginning of our state, hundreds of Oklahomans in the military have made the ultimate sacrifice in order to protect and preserve our freedoms,”Stitt said. “Today, we recognize that while they no longer may be with us, our brothers and sisters who paid the ultimate price still live on. They live on in our memories and our hearts and they live on through their legacy, which reminds us of the selfless devotion required to secure our freedom.”

View the ceremony at facebook.com/WoodringWall/videos.