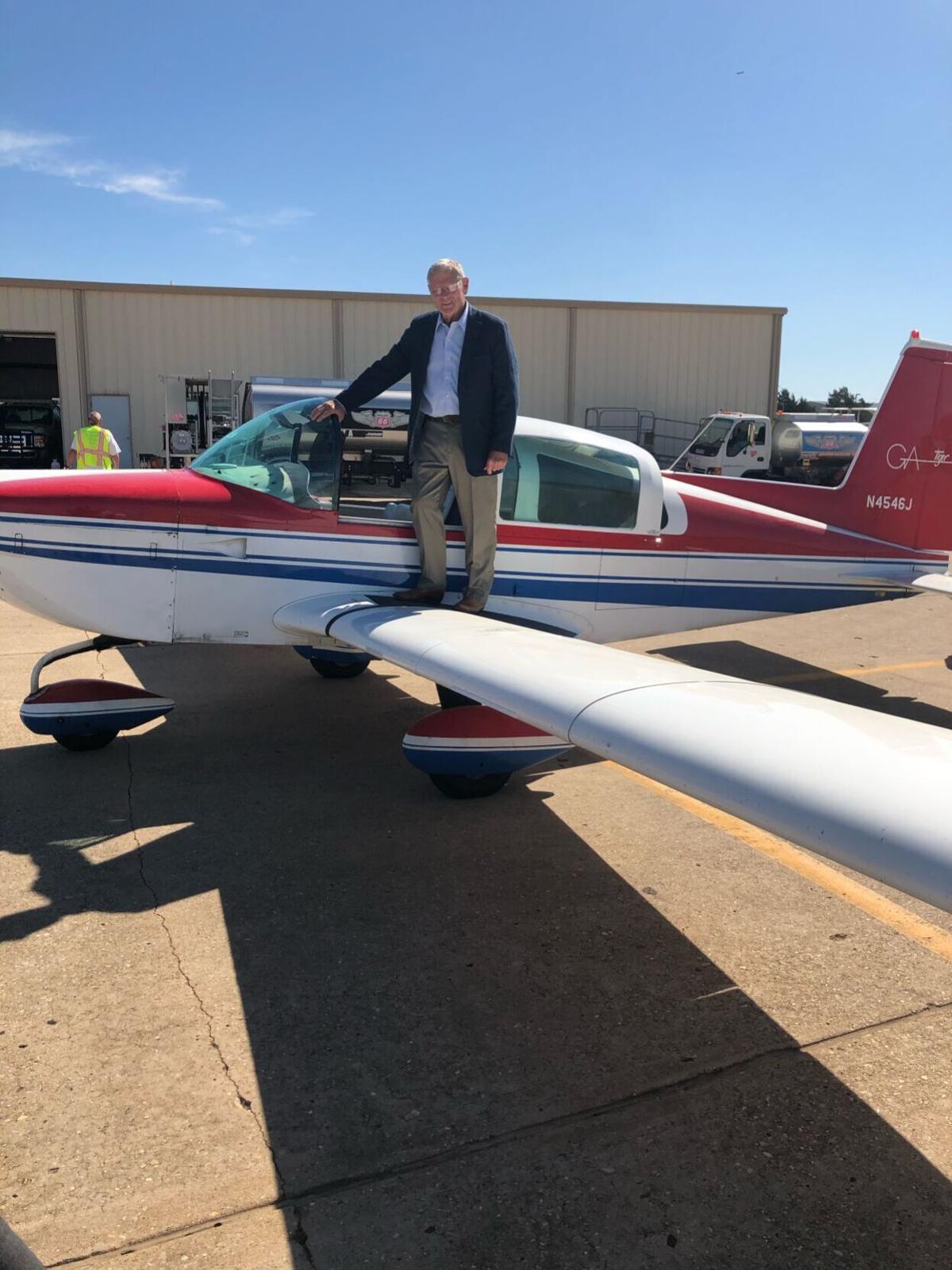 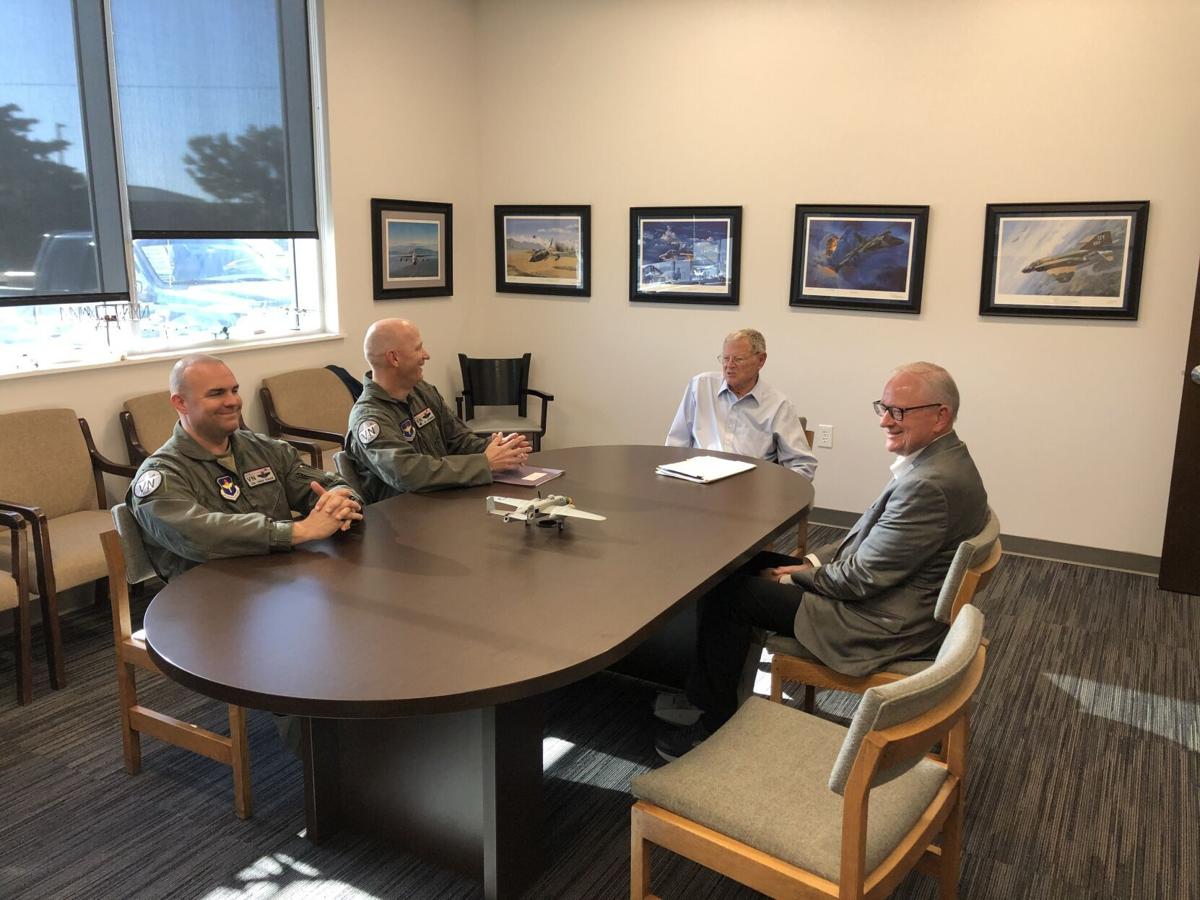 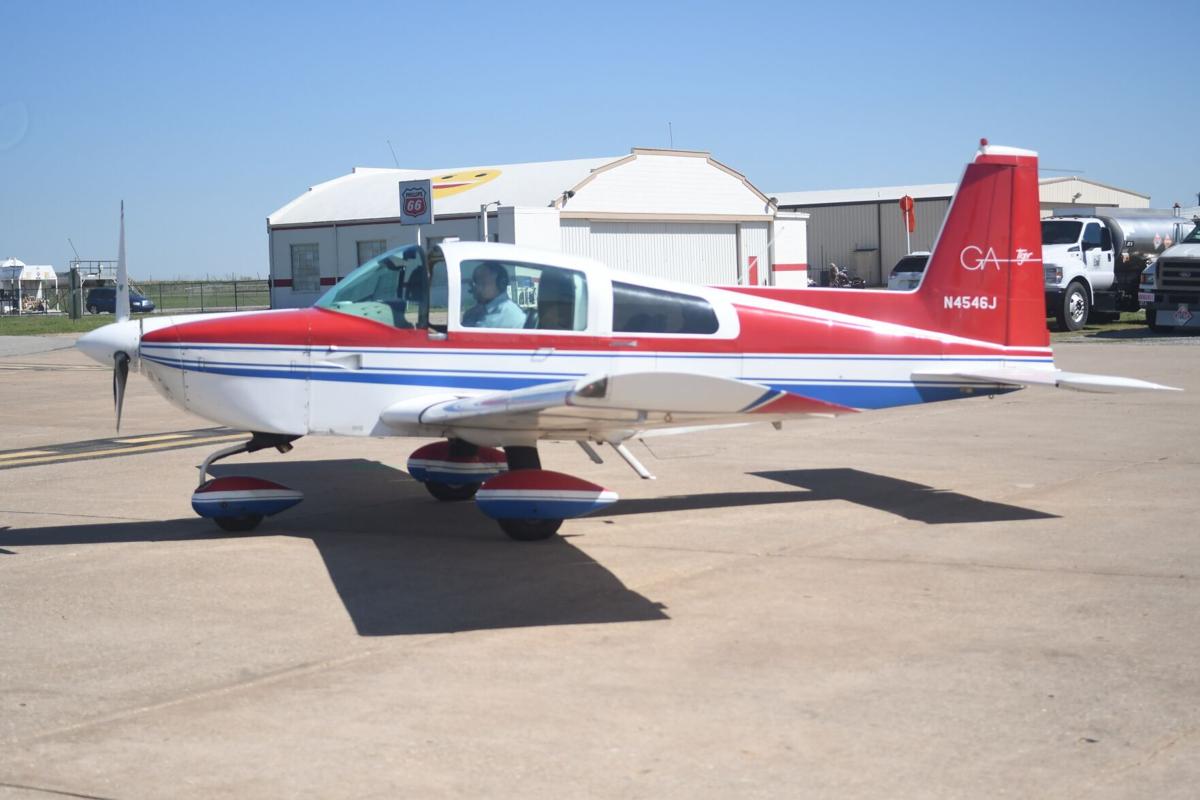 Sen. Jim Inhofe prepares to take off in his plane from Enid Woodring Regional Airport on Friday, April 30, 2021.

ENID, Okla. — Sen. Jim Inhofe made his first stop in Enid when visiting Oklahoma communities on Friday for the first time since the COVID-19 pandemic began.

At 86 years old, Oklahoma’s longtime GOP senator flew into Enid Woodring Regional Airport in his Grumman Tiger private plane, then put in a long-standing order for a chocolate cream pie to take back to the skies.

“We’re celebrating today. This is our coming-out party,” Inhofe said. “Can you imagine it? Spending a whole year without talking to real people?”

Inhofe hadn’t made an in-person appearance in Enid since he joined a ribbon-cutting ceremony for Woodring’s new terminal in August 2019, though having met virtually over the summer.

During his visit, Inhofe, the ranking minority party member of the U.S. Senate Armed Services Committee, said he believed national defense was at risk for being shortchanged under President Joe Biden’s administration.

“We’re going to take some big hits in the military,” he said.

Inhofe, listed as one of the most conservative members of the Senate, said Biden’s joint session address to both houses on Wednesday was, predictably, “a very liberal approach,” as the president had already spent or proposed spending about $6 trillion in his first 99 days.

For the upcoming fiscal year, Biden is proposing $715 billion top line in Department of Defense spending. Inhofe called this a cut because it’s below inflation at 1.6% and said this should be at a minimum of $740 billion, at a 3% to 5% increase above inflation.

Non-defense spending was proposed at $769 billion, almost 20% more than this year’s, including funding for climate change initiatives Inhofe has long opposed.

Biden’s proposed defense cuts would pick up where Barack Obama’s administration left off during the last five years of his presidency, having decreased defense spending by 25%.

China and Russia are both rapidly expanding their own military defense programs and developing better equipment than the U.S., Inhofe said. At the tail end of Obama’s term, China was increasing its defense spending 83% and has spent $200 billion in the last 10 years on new investments, Inhofe said.

In 2019, the U.S. spent about 2.25 times more on defense than Russia and China combined, to a total $732 billion, according to the Stockholm International Peace Research Institute. This percentage increase continued in 2020, but Russia spent considerably less while still at an increase.

The U.S.’s spending increased for a third consecutive year after seven years of reductions, according to the report released Monday.

“We have countries that can pose a direct threat to Enid, Oklahoma, and this is something we didn’t deal with before,” Inhofe said.

“We have locked in a lot of the mil-con — military construction — that we otherwise would not have done this early, anticipating this dry spell is going to come,” he said later Friday.

That’s if the proposed spendings even make it through the Senate committee, Inhofe said, when its ranking members meet to draft the regular National Defense Reauthorization Act.

He espoused Oklahoma’s five military installations, all of which saw increased funding and population since the federal government’s Base Realignment and Closure (BRAC) rounds began in 1987.

Oklahoma is the only state whose bases all benefitted from all five BRAC rounds.

“We have countries that can pose a direct threat to Enid, Oklahoma, and this is something we didn’t deal with before."

He said only 7% of the bill is dedicated to roads and bridges, as Republican Sen. Tim Scott also said during his party response Wednesday to Biden’s speech to Congress.

The bill actually would allocate a total $277 billion, or 13.85%, since it includes what Scott said should be considered infrastructure such as high-speed broadband installation, airports and inland waterway projects.

“That’s the one thing people agree we need to spend money on,” Inhofe said about Biden’s transportation proposals. “But he’s actually loaded that all up with his very liberal agenda.”

He said a bipartisan group of senators would draft their own infrastructure bill that likely would make it through Congress.

Inhofe, also on the Senate Committee on Environment and Public Works, said defense and transportation/infrastructure — which he said are both constitutionally asked of the government to provide — have been his two top priorities in Congress since he was elected to the House of Representatives in 1986, then succeeded David Boren in the Senate in 1994.

Now beginning his sixth elected term (including the special election to complete Boren’s), Inhofe said he has no plans of slowing down during what he said in November would be his last term in office.

“I’m in a hurry. We’ve got things to do,” he said. “And there’s competition for those things, too. When we’re looking at things like transportation, we’ve got to make sure we get the funding in Oklahoma to get that done, and I’m not shy about that.”