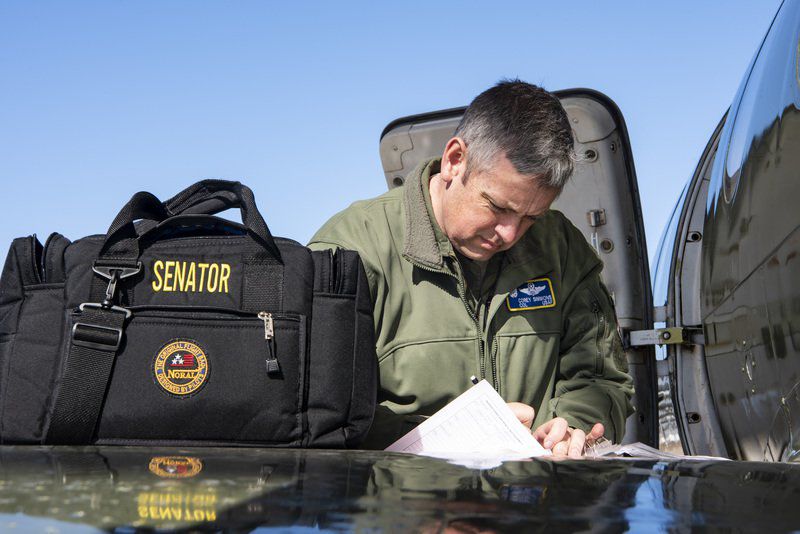 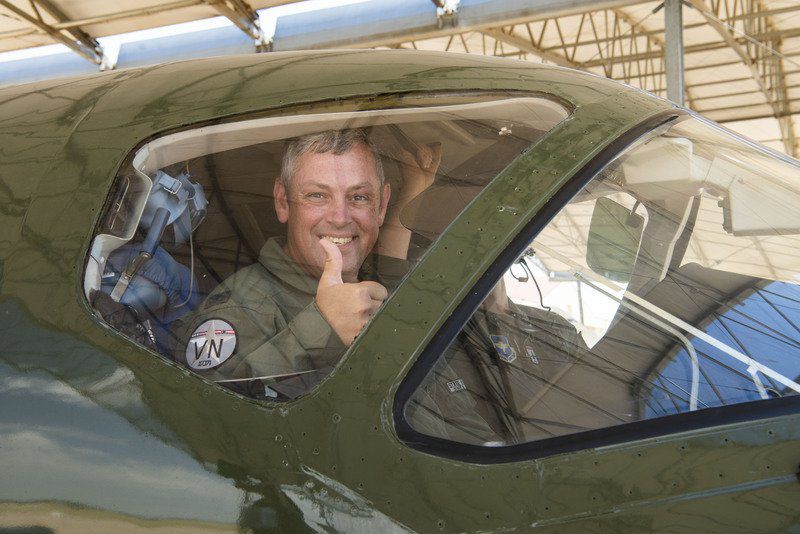 Col. Corey Simmons, commander of the 71st Flying Training Wing at Vance Air Force Base, gives a thumbs-up from the cockpit of a T-1 during his final sortie as commander at the base June 18. (U.S. Air Force photo provided) 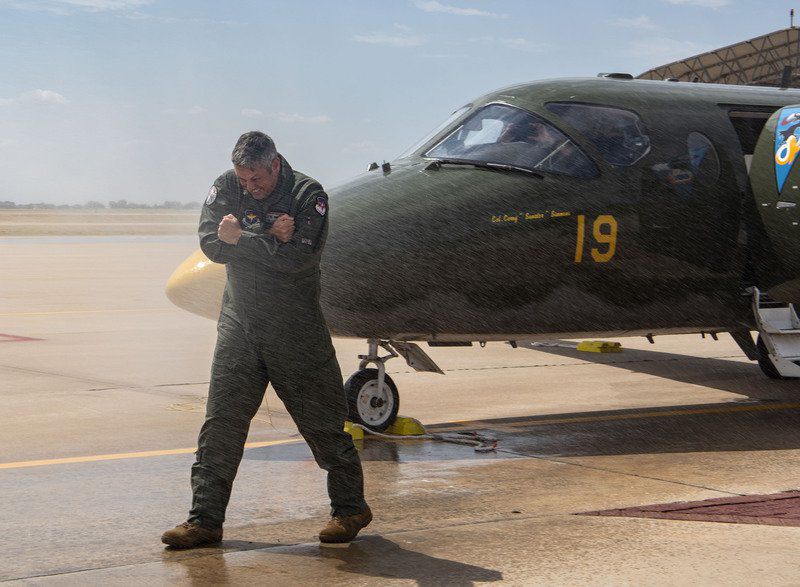 Col. Corey Simmons, commander of the 71st Flying Training Wing at Vance Air Force Base, is sprayed with water after his last flight as commander at the base, Thursday, June 18, 2020 — a base tradition for commanders after their "fini flight." (U.S. Air Force photo provided)

Col. Corey Simmons, commander of the 71st Flying Training Wing at Vance Air Force Base, gives a thumbs-up from the cockpit of a T-1 during his final sortie as commander at the base June 18. (U.S. Air Force photo provided)

Col. Corey Simmons, commander of the 71st Flying Training Wing at Vance Air Force Base, is sprayed with water after his last flight as commander at the base, Thursday, June 18, 2020 — a base tradition for commanders after their "fini flight." (U.S. Air Force photo provided)

Col. Corey Simmons took his last flight Thursday as commander of the 71st Flying Training Wing, as he prepares to relinquish his post this month and move on to a larger command in the Air Force.

Simmons came to Vance Air Force Base in July 2018, and since has faced challenges ranging from a fatal T-38 crash to increased pilot production quotas and operating during COVID-19. But, in spite of the challenges, Vance has distinguished itself under Simmons as the only Air Education and Training Command base to meet its production goals in both 2018 and 2019.

Vance has flown about 275 sorties and about 1,000 takeoffs and landings every duty day over the last two years, and 732 pilots have graduated under Simmons’ command.

And, Vance graduates have excelled after graduation. Simmons reported 99% of graduates who went on to fighters during his tenure have passed their follow-on training, and so far his team’s graduates in all other aircraft platforms have mustered a 100% pass rate.

Vance was recognized as the top AETC pilot training wing in 2018, and at one time during Simmons’ tenure, the base had the top AETC squadron in T-1, T-6 and T-38 aircraft and the top operations group in AETC.

“In every platform, at some point one of our squadrons was top in AETC in the two years we’ve been here,” Simmons said, deferring credit to his team.

Vance also has played a significant role in the last two years in the Air Force’s efforts to streamline and modernize pilot training.

Virtual reality simulators, virtual air traffic control training, use of iPads for academics and flight books, all got their start at Vance. In July, just as Simmons departs, Vance will be the first base to implement UPT 2.5 — the Air Force’s next phase in “Pilot Training Next.”

While attention at Vance is focused on training pilots, the base also plays an operational function in the Air Force, deploying or redeploying 100 airmen over the last two years.

“Across the globe, in almost every contingency operation our nation has faced, we’ve had airmen leave from Vance,” Simmons said.

Vance’s superior performance among AETC bases has drawn a lot of attention during Simmons’ term as commander. The base has hosted two undersecretaries of the Air Force, the Air Force vice chief of staff, Supreme Allied Commander Europe, Air Combat Command commander, two successive AETC commanders and the Chief Master Sergeant of the Air Force.

Simmons said top commanders have come to see what’s happening at Vance because “we’re the best at what we do.”

“We find new, creative, innovative ways to not only do it faster, cheaper and better, but to do it with a sense of pride,” he said.

“They’ve done a great job of connecting me with the community,” Simmons said. “They’ve been fantastic at supporting us, and the relationship with the town has been second-to-none.”

“They spent many hours on the phone with me, helping get things done for my airmen,” Simmons said.

Infrastructure upgrades have progressed during Simmons’ term, in spite of the increased operating schedule. Work to the inside runway, burying base power lines, and upgrades to base living quarters all have taken place, and Simmons said the base is “well-postured next year” for a $50 million project on the center runway, and for future plans for a $60 million operations complex.

COVID-19, with its social distancing requirements, has posed a special challenge at Vance. But, as pilot training was deemed critical to national defense, the work continued.

Simmons said the base went from a stand-down to 70% operations almost immediately after that order, and within six weeks new procedures allowed the base to return to a 100% flight schedule while still observing COVID-19 safety precautions for student pilots and instructors.

But, with all the other challenges he and his team have faced, Simmons said the hardest times during this command tour surrounded two Class A mishaps, particularly the Nov. 21, 2019, T-38 crash that claimed the lives of Lt. Col. John “Matt” Kincade and student pilot 2nd Lt. Travis Wilkie.

The other Class A mishap involved a T-38 that crashed in Woodward County in August 2018. The pilot safely ejected in that crash.

Simmons said the community’s support was vital during the aftermath of both T-38 crashes.

“As awful as those events were for our Vance family, we always knew we had the support we needed from the local community to be able to persevere,” Simmons said.

After November’s fatal crash, Simmons said “I bet I got 10,000 messages from the community, just letting us know they were thinking about us, praying for us and they were there for us as we worked through that.”

As he prepares to leave Vance and Enid, Simmons said he will miss how much the community “felt like home.”

“Both my wife and I grew up in small towns, and Enid has that small-town feel,” Simmons said. “People here love and appreciate airmen and find a way to get to yes for our airmen more than any place I’ve ever been in.”

Simmons’ change of command will be 10 a.m. June 29. Due to COVID-19 restrictions, it will not be a large gathering and will be live-streamed on the base Facebook page. Col. Tim Danielson is slated to assume command at Vance, coming from serving as commander of the air mobility operations group at Pope Air Force Base, N.C.

Simmons will move on to command the 60th Air Mobility Wing at Travis Air Force Base, Calif.

As he prepares to move on to his next command, Simmons said he looks forward “to being able to continue to serve.”

“I love leading airmen and I love being part of an organization that matters,” Simmons said. “I’ve loved Vance because I felt like it mattered, and I know when I get to Travis, the mission there is incredibly important to our national defense, and I want to be a part of that.”