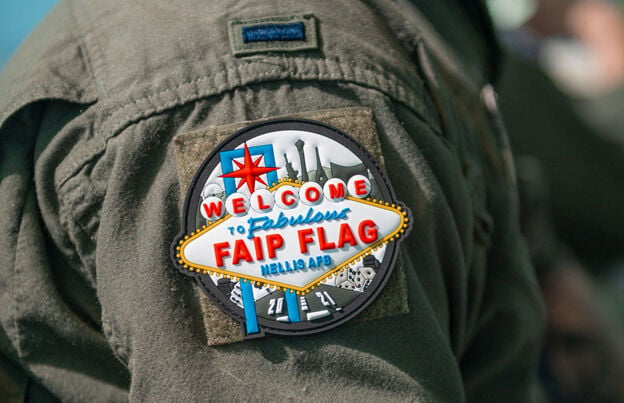 The FAIP Flag 2021 patch was designed by 1st Lt. Daniel Taylor from Vance Air Force Base. FAIPs from throughout Air Education & Training Command, received the patch along with other swag when they arrived at Nellis AFB for FAIP Flag. (U.S. Air Force Photo) 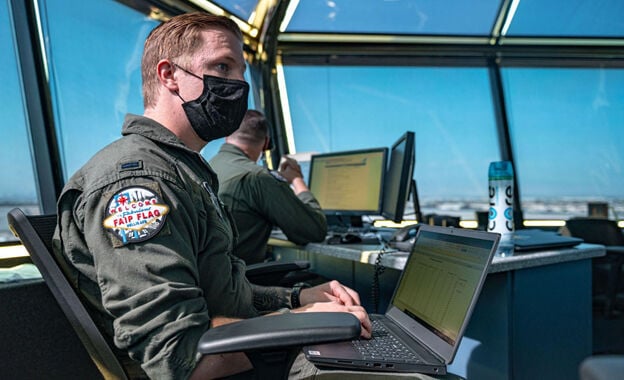 The FAIP Flag 2021 patch was designed by 1st Lt. Daniel Taylor from Vance Air Force Base. FAIPs from throughout Air Education & Training Command, received the patch along with other swag when they arrived at Nellis AFB for FAIP Flag. (U.S. Air Force Photo)

Each year, instructor pilots from the pilot-training bases gather for flying competition, leadership seminars and lots and lots of team building.

Team Vance was the host, and the overall competition winner, for the gathering known as FAIP FLAG 2021. Vance partnered with Nellis Air Force Base, Nevada, to make it one of the most unforgettable FAIP FLAGS to date.

The weekend started with about 100 training aircraft flying through the Vegas skyline in groups of two to four, about four minutes apart. This, interspersed with Nellis’ fighter aircraft sharing the airfield, made for an awesome sight.

The 300 pilots had five chances to take home a prize for their base. They competed in a spot landing, time on target, in-flight selfie and the coveted crud tournament award. For the flying competitions, there was a winner for each of the three training aircraft. All of these were tabulated into an overall wing winner.

The spot landing judged a pilot’s ability to land on a specific spot located the runway. Laughlin AFB, Texas, took home the prize for the T-1A Jayhawk and T-38C Talon. Sheppard AFB, Texas, won in the T-6A Texan II.

For the time on target competition, pilots had specific times they were supposed to fly-in. Points were deducted for being off the planned time. In this competition, Laughlin’s T-1 Jayhawk won and Vance won the other two aircraft categories.

The final competition, crud, is a part of pilot heritage that dates back to the Royal Canadian Air Force in World War II. It’s a fast-paced game played on a billiards table with no cue sticks. Each base contributed two teams for a crud tournament that resulted in Vance as the victor.

After a full day of competition between the bases, Vance emerged as the overall wing winner of FAIP FLAG 2021.

The purpose of FAIP FLAG 2021 went beyond the friendly competitions between bases.

“FAIP FLAG is important because we’re able to see that we’re a part of a team that is essential,” said 1st Lt. Ashley Bird, a FAIP in the 33rd Flying Training Squadron at Vance. “We’ve had five general officers tell us that we matter. That’s important.”

She went on to emphasize that the relationships formed at FAIP FLAG are critical.

“We’re able to make connections here, and in a group of 300, some of us will become generals,” said Bird. “It’s important to make those connections now.”

The FAIPs heard from a variety of seasoned pilots to include Wills; Maj. Gen. Jeannie M. Leavitt, the first female fighter pilot and the Air Force Chief of Safety; multiple leaders from Nellis AFB; and pilots from a variety of different fighter and cargo aircraft.

Each speaker explained the need for pilots to learn the fundamentals, like taking off and landing, the correct way. They emphasized that FAIPs are the ones at the training bases, cultivating an environment of excellence, and making that happen.

wFAIP FLAG ended Sunday as each jet departed for their home base.

Before their departure, Team Vance gathered in front of the Thunderbirds’ hangar — home of the U.S. Air Force Air Demonstration Squadron — for one last morale boost.

“This is your future,” said Col. Erick Turasz, the 71st Operations Group commander at Vance, to the gathered pilots. “You all are creating the next generation of pilots, and soon you will be in these aircraft – safeguarding our nation. Be proud of what you accomplished here, and be proud of what you’re doing at Vance.”