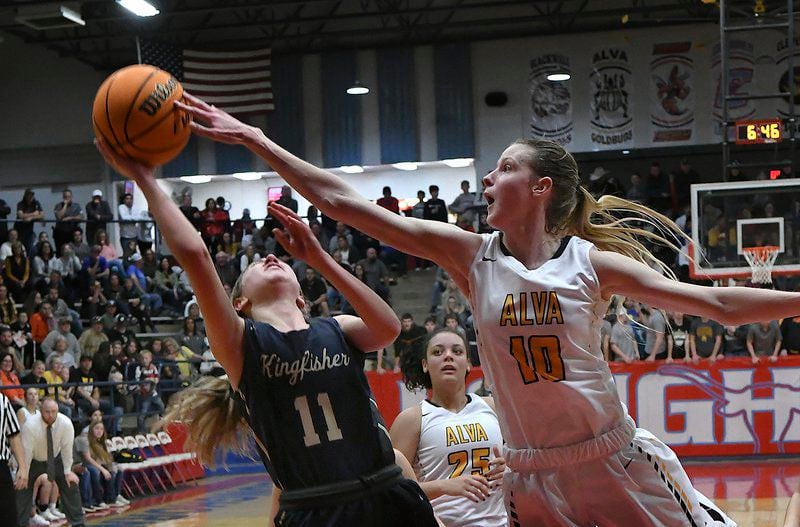 Alva's Lexie Raihm gets a hand on the shot of Kingfisher's Kina Frost during the finals of the Wheat Capital Basketball Tournament Saturday, Jan. 11, 2020, at Chisholm High School. 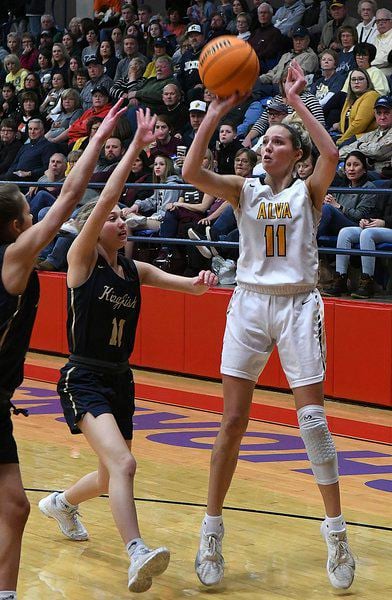 Alva’s Payton Jones shoots against Kingfisher during the finals of the Wheat Capital Tournament Saturday, Jan. 11, 2020, at Chisholm High School. 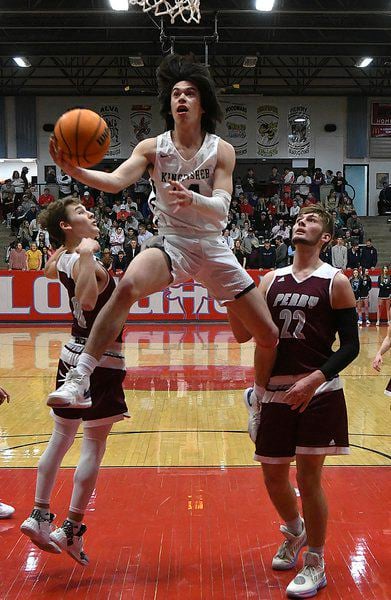 Kingfisher’s Bijan Cortes gets by Perry’s Jace Goldsberry and Mason Drake for a basket during the finals of the Wheat Capital Tournament Saturday, Jan. 11, 2020, at Chisholm High School.

Alva's Lexie Raihm gets a hand on the shot of Kingfisher's Kina Frost during the finals of the Wheat Capital Basketball Tournament Saturday, Jan. 11, 2020, at Chisholm High School.

Alva’s Payton Jones shoots against Kingfisher during the finals of the Wheat Capital Tournament Saturday, Jan. 11, 2020, at Chisholm High School.

Kingfisher’s Bijan Cortes gets by Perry’s Jace Goldsberry and Mason Drake for a basket during the finals of the Wheat Capital Tournament Saturday, Jan. 11, 2020, at Chisholm High School.

“It’s been a while since we’ve had a group that’s had this much success this early,” Alva head coach Dusty Horn said. “But it’s good to be back there. It’s a good feeling for our girls. They’re excited. Just really proud of them.”

Payton Jones led her team with 31 points and led Alva to a 65-52 win. She was named the girls’ MVP of the tournament.

After taking over the semifinal game to help her team overcome a 16-point deficit to Chisholm the night before, Alva’s Payton Jones was right back at it against Kingfisher. With the game tied at 4-4, Jones went on an eight-point run by herself to give the Ladybugs a 12-4 lead. Jaedyn Williams’ two free throws broke Jones’ streak and made it a 14-6 game after one period.

Then, Jones went on a five-point run of her own to start the second quarter.

Kingfisher’s defense allowed 16-straight points before the Lady Yellowjackets were able to respond. Kingfisher’s Jenni Beebe and Jenna Mueggenborg put the offense back on track. But Alva responded with scoring plays on three straight possessions to end the quarter. Alva brought its lead back up to 16 with a 28-12 halftime score.

Jones continued her dominance in the second half, leading the Ladybugs in scoring for the last two quarters. She shot 9 of 10 from the free throw line in the fourth quarter alone and finished 13 of 14 for the night. Lexi Reihm finished second with 21 points.

Reihm was named to the All-Tournament team, along with Jones.

While the Ladybugs finished with a 13-point victory, Alva seemed like it would suffer the same fate as Chisholm had the night before. Like the Lady Longhorns, Alva came into the second half with a 16-point lead and saw it chiseled down to single digits at the end of the third quarter.

Horn said that during the semifinal game, he knew that Jones “wasn’t going to let us lose,” and with support from several contributors, the Ladybugs realized a victory.

“But tonight, we got a little careless with the ball at times and turned it over and kind of let (Kingfisher) back in, Horn said.

The Lady Yellowjackets’ Kina Frost led the charge in the second half and helped Kingfisher cut the lead down to seven points. Frost led Kingfisher with 20 points.

But Kingfisher’s rally was thwarted, as Jones and the Ladybugs scored 24 points in the fourth quarter to close out the game and avoid a comeback effort.

For the sixth time in seven years, the Kingfisher boys hoisted the championship trophy after defeating Perry by 19 points in the Wheat Capital Tournament championship game Saturday night.

The defending Class 4A state champions did not play in last year’s tournament.

Kingfisher’s Bijan Cortes scored a team-high 35 points to lead the Yellowjackets to a 68-49 win over Perry. Cortes was named the tournament MVP.

“It’s just neat for our kids,” head coach Jared Reese said of the tournament championship. “It’s kind of become a great tradition to play here … Some of these kids were up in the stands as middle school kids. Now, they’re getting to experience it. It’s a great environment at the Wheat Capital. Really unlike anything other.”

Perry pushed the favored Yellowjackets throughout the game. In the first half, Perry never trailed by more than 10 points and got to within three points of the Yellowjackets at one point. Perry’s Jace Goldsberry got the Maroons within seven points near halftime. But Cortes hit back-to-back three-pointers to put the Yellowjackets back up by 10 points.

While Cortes took over the game at times, he had plenty of help from teammates like Matthew Stone and Jarrett Birdwell, who finished with 21 and eight points, respectively. They were also named to the All-Tournament team.

Perry’s Mason Drake and Goldsberry were also named to the All-Tournament team. Goldsberry led the Maroons with 21 points while Drake finished second with 18 points.

Longhorns close out with a win

The Chisholm Longhorns were able to close out the tournament with a win against rival Alva with a 66-64 victory.

Due to impending weather, the tournament schedule was altered and saw a few games canceled so that visiting teams could get on the road. The third-place games for the boys and girls and the girls’ seventh-place games were all canceled as a result.

Godfrey is sports writer for the Enid News & Eagle.
Have a question about this story? Do you see something we missed? Do you have a story idea for Tim? Send an email to tgodfrey@enidnews.com.