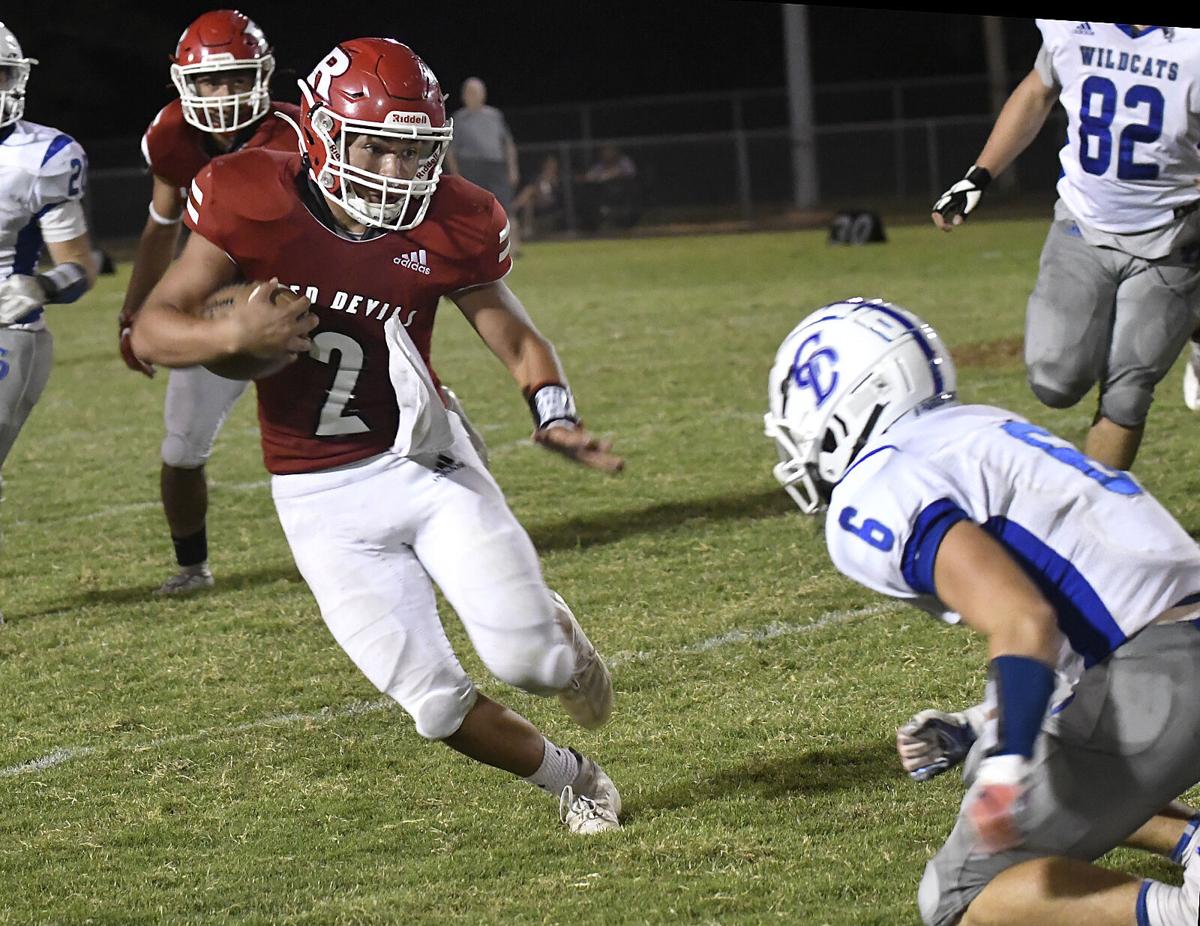 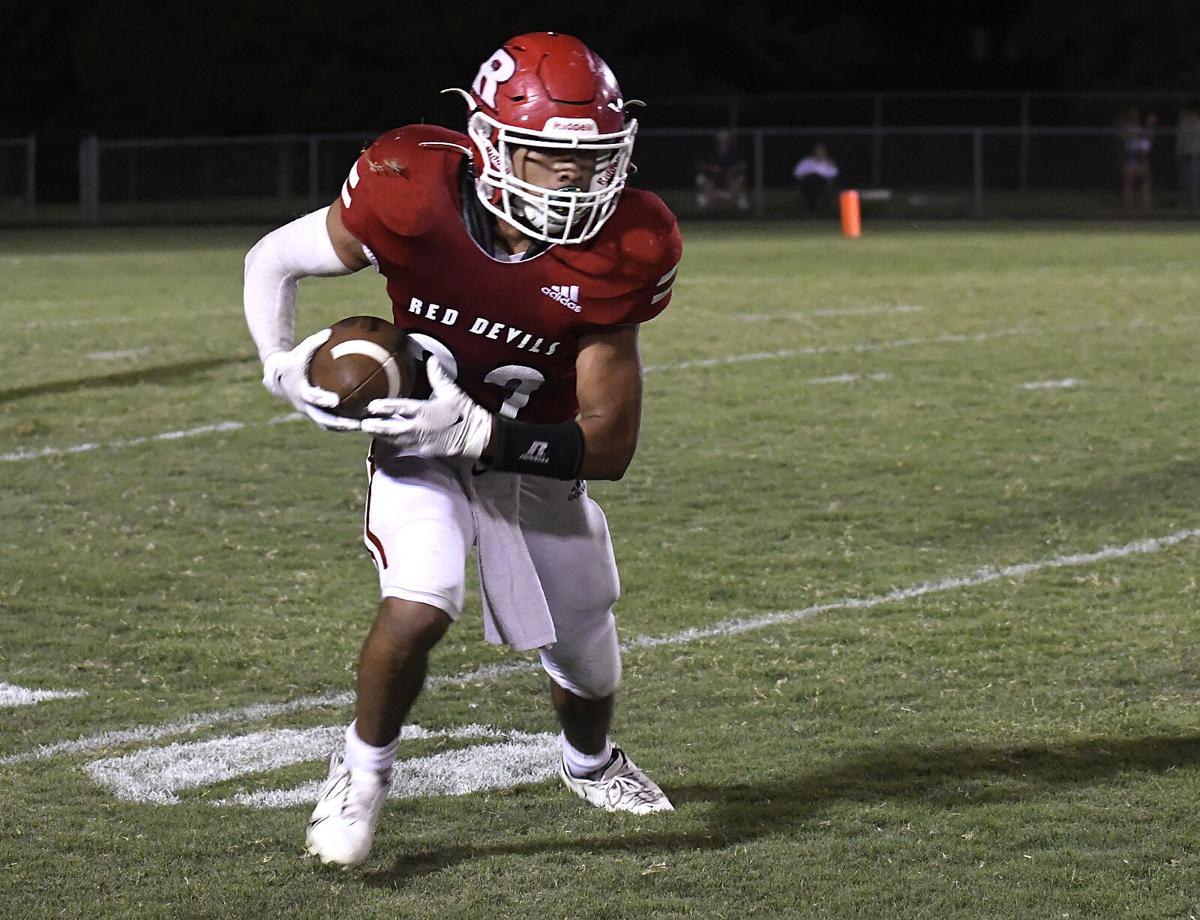 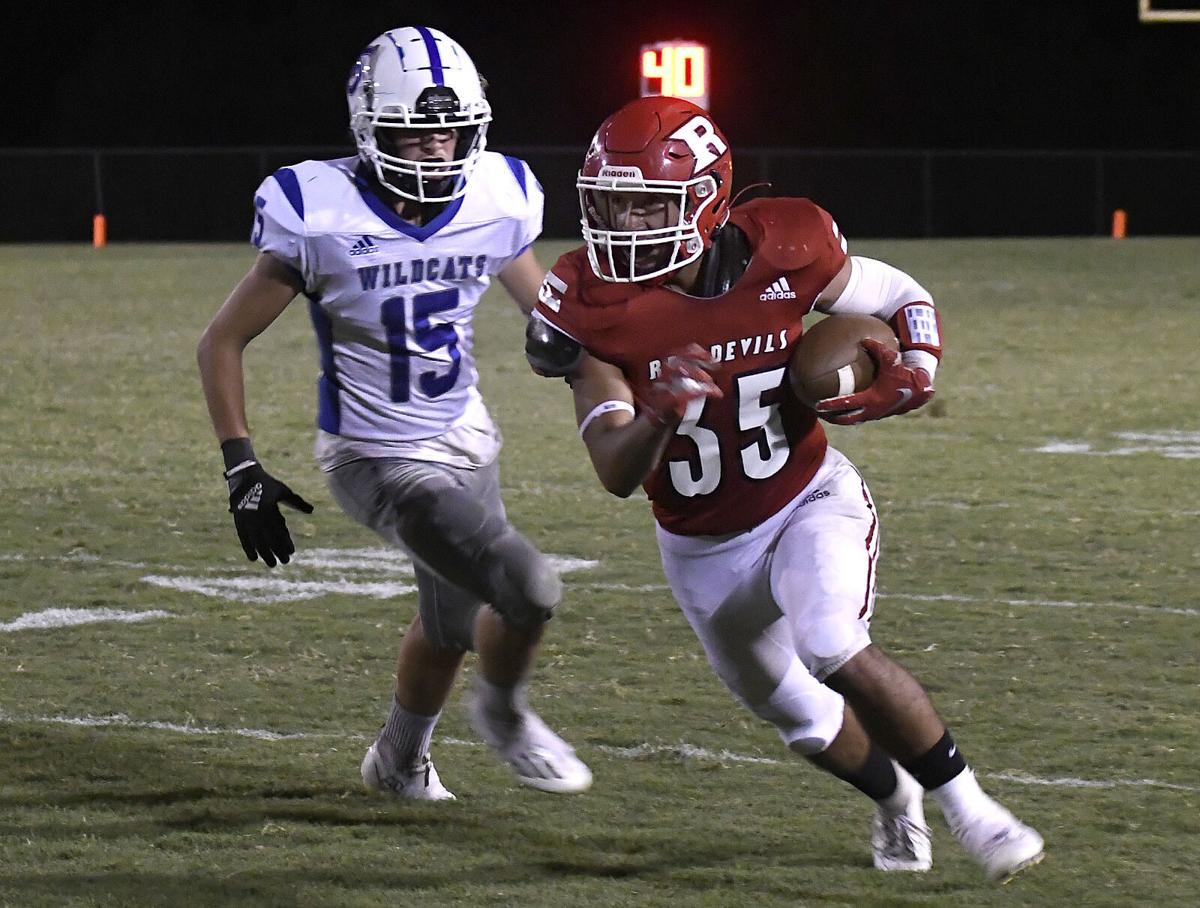 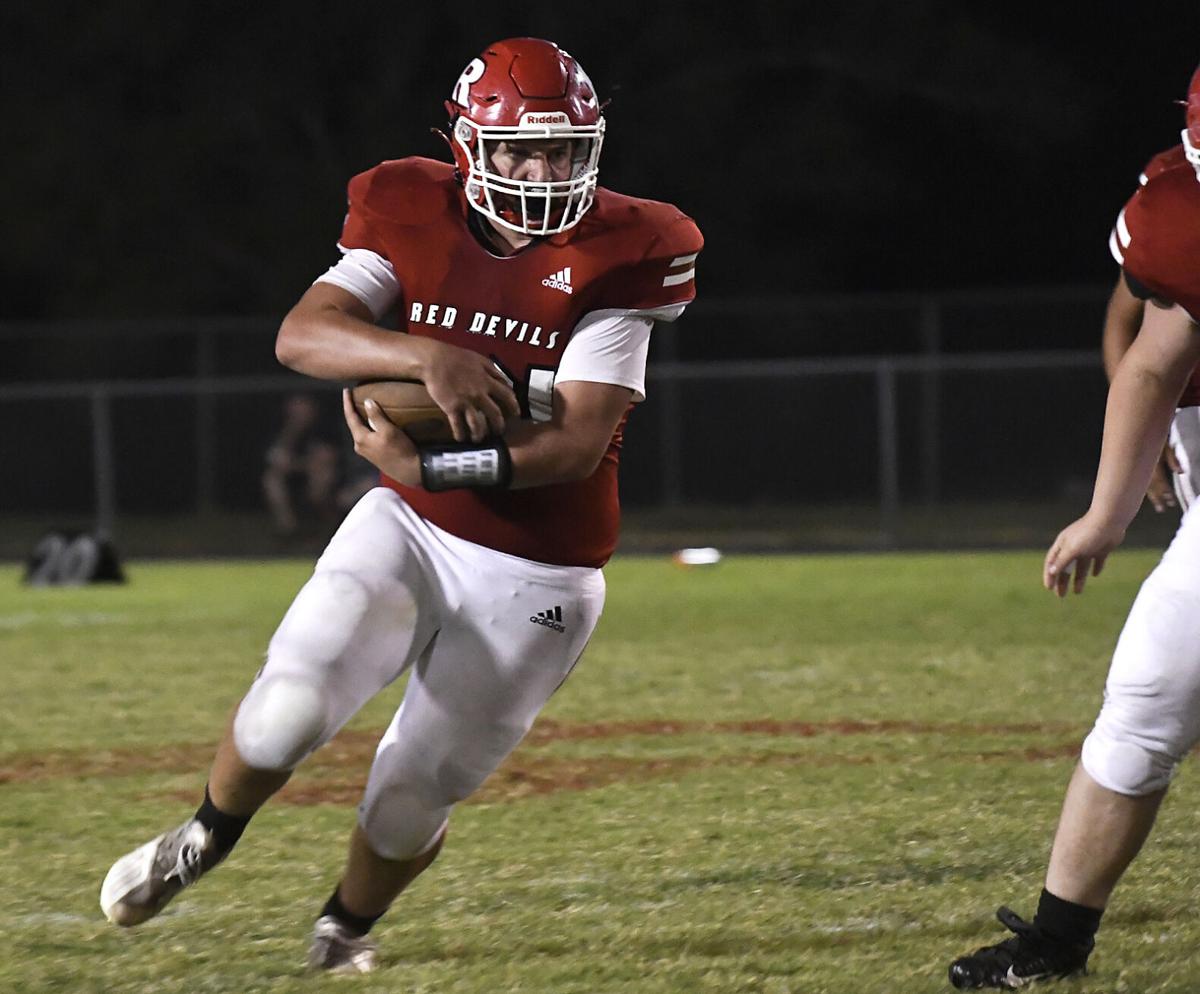 Ringwood's Cody Conaway clutches the ball as he runs against Covington-Douglas on Friday, Sept. 10, 2021, at Ringwood High School. 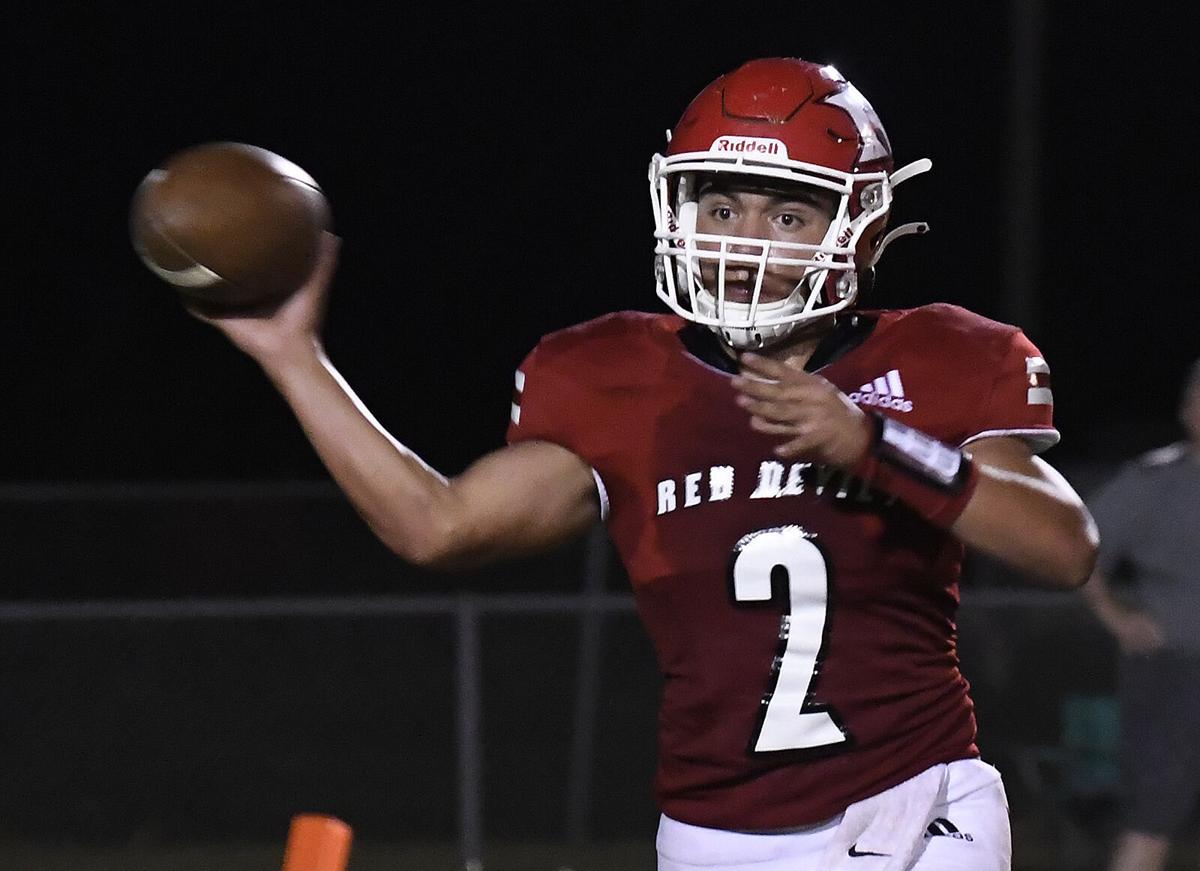 Ringwood's Cody Conaway clutches the ball as he runs against Covington-Douglas on Friday, Sept. 10, 2021, at Ringwood High School.

RINGWOOD, Okla. — Cody Conaway scored twice as Ringwood pulled away in the second half to beat Covington-Douglas 28-14.

Conaway scored on runs of 1 and 15 yards, while Jaxon Meyer threw two touchdown passes for the Red Devils.

Parker Smith scored both of Covington-Douglas’ touchdowns on long runs covering 45 and 74 yards. The second score tied the game at 14-14 in the third period, before Ringwood tallied twice to put the game away.

Ringwood had a balanced attack with 353 yards total offense — 170 on the ground and 183 passing.

HOLLIS — Bodie Boydstun ran for three touchdowns and passed for two more to lead Oklahoma Bible Academy to a 68-38 win over Hollis.

Boydstun, who ran for 98 yards, scored on runs of 3, 4 and 2 yards. He passed for another 203 yards, including touchdown passes of 19 yards to Harry Nunez and 29 yards to Jakob Colby.

Jud Cheatham, who ran for 95 yards, scored three times on runs of 4 and 2 yards, and an interception return.

Ian Eastin ran for 82 yards, including touchdown runs of 7 and 8 yards.

The game was a back-and-forth affair early, with the Trojans leading 20-16 after one period and 48-32 at the half.

Cade Cooper scored three touchdowns as Kingfisher bounced back from a loss last week to beat Chisholm 48-8 at Longhorn Stadium.

Cooper scored on runs of 4 and 62 yards, and ran a kickoff back 84 yards for a third touchdown.

Jax Sternberger threw a 26-yard touchdown pass to Cade Covalt and also ran 18 yards for a score for the Yellowjackets.

Slade Snodgrass ran a punt back 47 yards for a score, and Harrison Evans scored on a 2-yard run for Kingfisher.

Jackson Caddell scored Chisholm’s only touchdown on a 2-yard run.

ALVA — Fairview’s defense came up with a late goal-line stand to hold off Alva 26-19 to snap a 13-game losing streak to the Goldbugs.

The Yellowjackets stopped the Goldbugs on four running plays from the one with less than a minute to go to hang on for the win. Linebacker Tegan Gilchrist made the final stop on fourth down as the clock expired.

“It was first-and-goal with 45 seconds left and we stopped them four straight plays,” said Fairview coach Robert Bernard. “We faced some adversity we hadn’t faced in game. Credit our defense and our kids for just battling.”

Fairview led 18-0 at the half, but fell behind 19-18 before Blake Perez, who ran for 117 yards, scored with less than 2 minutes left to put the Yellowjackets on top again. It was his third touchdown of the game.

Jax Bernard scored on a 2-yard run for Fairview.

Alva scored on a couple of long passes and a long run.

JJ Pippin and Blake Choate each scored twice as Timberlake ended the game at the half on the 45-point mercy rule. Pippin scored on a 60-yard run and a 60-yard kickoff return. Choate scored on runs of 18 and 56 yards.

Kino Richards scored the only touchdown for Waukomis, catching a 50-yard touchdown pass from Dallas Ives.

Timberlake, 3-0, will be off next week. Waukomis, 0-2, will be at home against Pioneer.

GARBER — Garber scored 44 points in the first quarter as the Wolverines blasted Depew 50-0.

Tye Chester scored three touchdowns for Garber on runs of 37, 1 and 9 yards.

Brett Howry threw touchdown passes of 45 yards to Solomon Bishop and 36 yards to Carson Schovanec, while also running 7 yards for a score. Mark Bishop ran 42 yards for a Garber touchdown.

The Garber defense held Depew to only 60 yards total offense.

The Wolverines, 2-0, will play at Coyle next week.

Five players scored for the Broncs, with Zac Snodgrass scoring twice on a 3-yard run and a 28-yard reception from Maddox Myers. Andrew Wright scored on a 6-yard run, Jack Arthur on a 15-yard run and Braxtyn Rothermel on a 5-yard run. The Broncs’ other touchdown came on an 82-yard kickoff return by Nathan Smith.

Medford’s only score came on a 48-yard run by Caden Keller.

The Broncs, 2-1, will play host to Seiling next week. The Cardinals, 0-1, will be at Pond Creek-Hunter.

BEAVER — Luke Swartwood returned a kickoff for a touchdown and threw three touchdown passes to lead Canton to a 57-8 win over Beaver.

Swartwood ran the opening kickoff back for an 85-yard score. He also threw touchdown passes of 32 and 20 yards to Conner Cox and 20 yards to Lem McIntosh. Cox also returned a fumble 30 yards for score.

Brandon Day scored on an 8-yard run and an 80-yard kickoff return for the Tigers. Dean Hunt recovered a fumble in the end zone for another score.

Ensminger’s scoring passes went for 25 yards to Harrison Stapleton and 24 yards to Kaden Craig. He also scored on a 25-yard run.

Conner Czapanski scored the Panthers’ other touchdown on an 8-yard run.

Pond Creek-Hunter, 2-1, will play host to Medford next week.

Have a question about this story? Do you see something we missed? Do you have a story idea for News & Eagle Sports? Send an email to tmasri@enidnews.com.