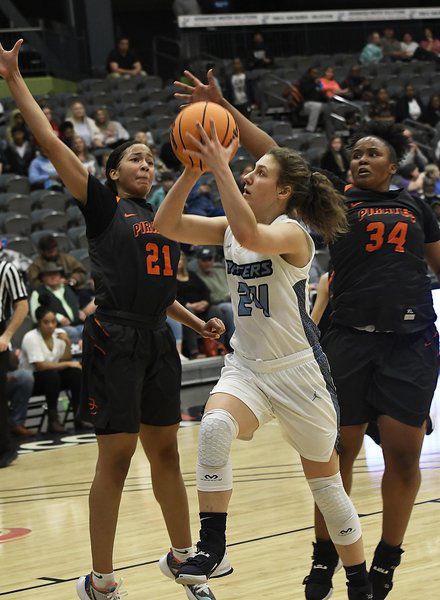 Enid's Claire Dodds drives to the basket against Putnam City's Daja Thomas and Nevaeh Bell Tuesday, Nov. 26, 2019, during the home opener at the Stride Bank Center. 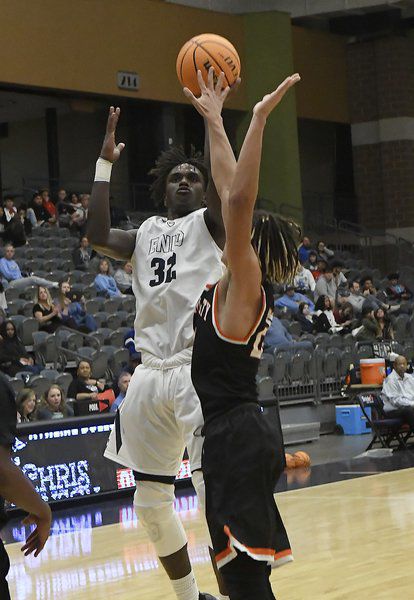 Enid's Claire Dodds drives to the basket against Putnam City's Daja Thomas and Nevaeh Bell Tuesday, Nov. 26, 2019, during the home opener at the Stride Bank Center.

Tuesday night’s home-opening loss to Putnam City (1-0) provided one of the most important lessons: knowing how to play with the lead. After stealing it from the Lady Pirates twice in the first half, Enid held an eight-point lead at halftime. But a strong second half by the Lady Pirates led to Putnam City’s 59-46 win over Enid at the Stride Bank Center.

Gregory said she didn’t think the Pacers’ performance in the second half was much different than the first half.

“I do think they (Putnam City) weren’t really prepared for us to come out like we did,” she said.

Gregory explained there’s a stigma that comes with playing against Pacers, that teams feel they can come into Enid and walk away with a win.

“I don’t think they were expecting to be down by eight at halftime,” she said.

The Lady Pirates led twice in the first quarter before Enid erased both advantages. After Putnam City drew a 3-0 lead, junior Mya Edwards prevented the Lady Pirates from extending it to 5-0 with a batted down layup. She scored on the transition. Then senior Niesha Fuston gave Enid a 1-point lead on the next possession.

After Putnam City pulled ahead once more, sophomore Olivia Phillips nailed back-to-back three-pointers to give Enid a 10-8 lead. Junior Claire Dodds’ first three-pointer of the game came near the end of the quarter and extended Enid’s lead to five points.

Dodds finished with a team-high 18 points and led the Pacers' scoring efforts in two quarters. After leading by five entering the second quarter, Phillips hit her final three-pointer of the night to make it an eight-point game.

Then, Dodds took over. The junior hit a pair of shots from beyond the arc and drove the open lane for a layup to rack up six of Enid’s 16 points. Edwards and junior Mary Ketterman hit three of Enid’s four free throws to help Enid to a 29-21 halftime lead.

But Putnam City erased Enid’s lead thanks to Jeana Meadows hitting a pair of field goals and a pair of free throws. Five other Lady Pirates combined for the remaining 12 points. While the offense erased the deficit, the defense kept Enid off the scoreboard until 4:41 left in the quarter. Fuston broke the scoreless streak with a layup.

“Instead of keeping going at them like we had in the first half, we kind of sat back on our heels,” Gregory said.

“We haven’t learned how to be up yet,” Gregory said. “They’re so used to being down all the time and never having a lead. That’s one of the things we have to learn throughout the year.”

Berry stands out in Plainsmen loss

There were few bright spots in Enid’s 25-point loss to Putnam City Tuesday night at the Stride Bank Center.

The Pirates (1-0) were in full control of the game, starting with the first quarter as Putnam City outscored Enid (1-1), 25-6. While Enid rebounded and chipped the deficit down to 12 points by halftime, Putnam City’s offense remained consistent in the second half and helped lead the Pirates to a 64-39 victory.

“We didn’t step out on the floor with total intensity to really go out and compete in the ballgame tonight,” said Plainsmen head coach Curtis Foster. “The lack of effort at the beginning of the ball game, it was like they were in a daze getting up and down the floor.”

Putnam City’s Kendural Jolly hit a trio of shots from behind the arc and scored 11 of his team’s 25 first quarter points. He led the team with 22.

“We got out butts kicked,” Foster said.

After the end of the first quarter, Enid’s defense stepped up and held Putnam City to 11 points. Senior Mason Berry led Enid on both sides of the floor, posting a tight defense on one end while scoring points on the other. Berry led Enid with six points in the second quarter before ending his night with nine. Senior Carter Owens led the Plainsmen with 11.

“His effort, his drive, his getting up and down the floor ... That young man (Berry) played a heck of a ballgame today himself,” Foster said.

Berry is one of the few Plainsmen trying to make up for the time and reps he missed since transitioning from the gridiron to the hardwood. As good as he is now, Berry will only improve with more reps, Foster said.

“If he gets those reps in … You’re going to see more of that talent come out,” he said.

Godfrey is sports writer for the Enid News & Eagle.
Have a question about this story? Do you see something we missed? Do you have a story idea for Tim? Send an email to tgodfrey@enidnews.com.