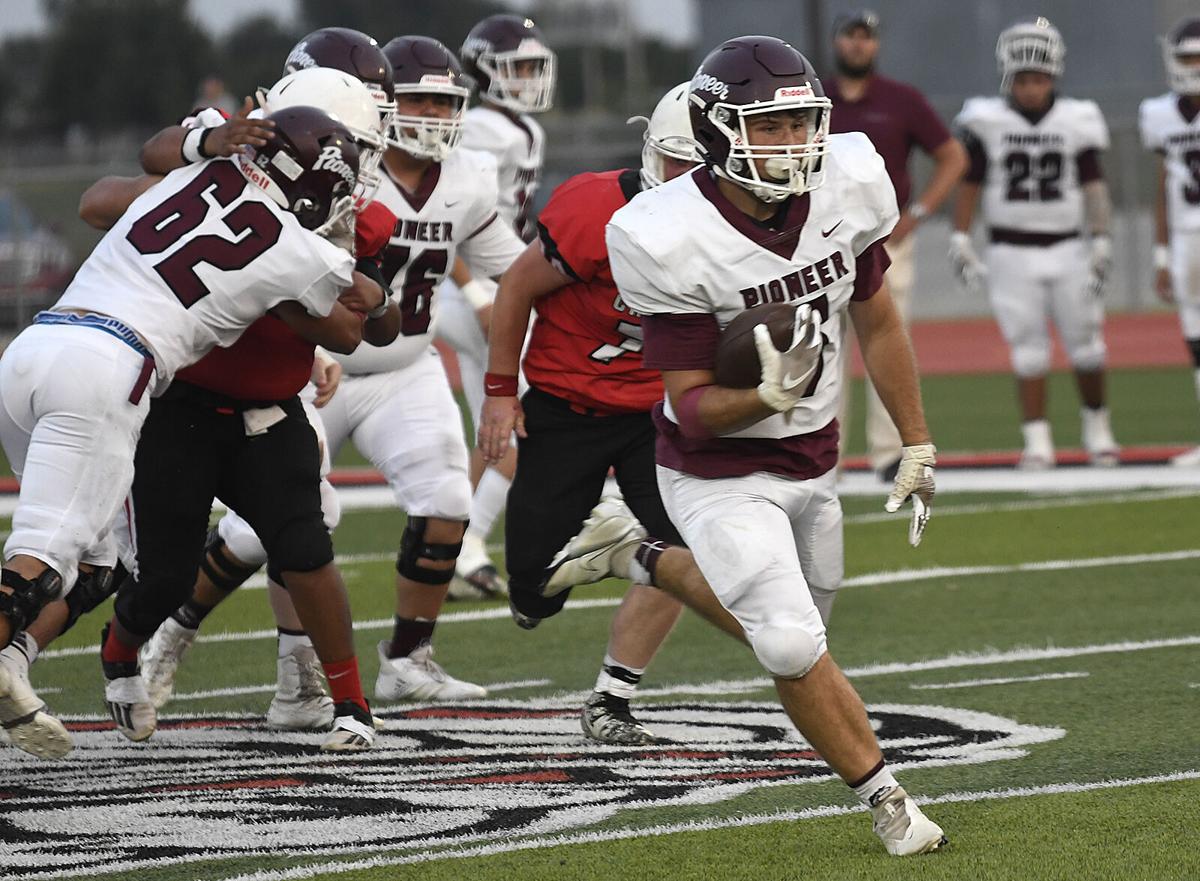 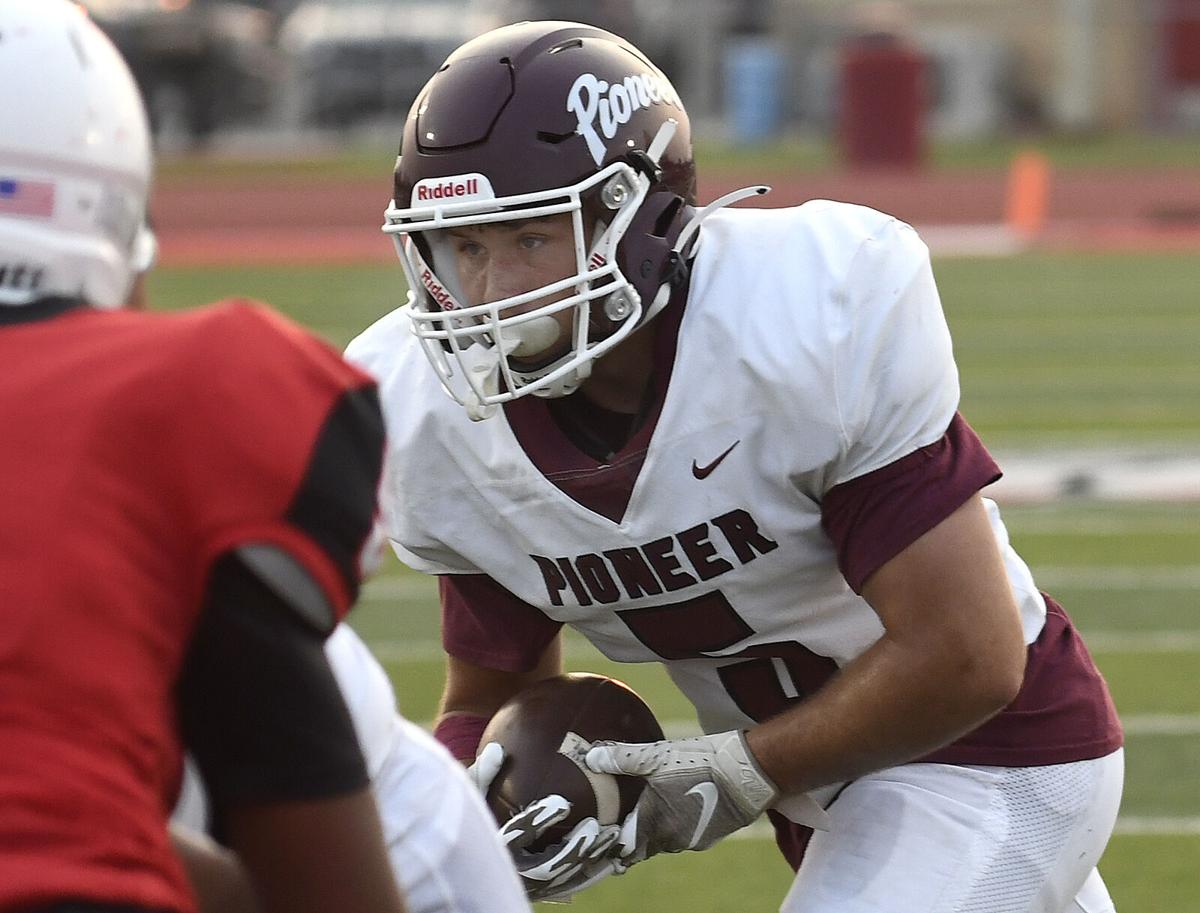 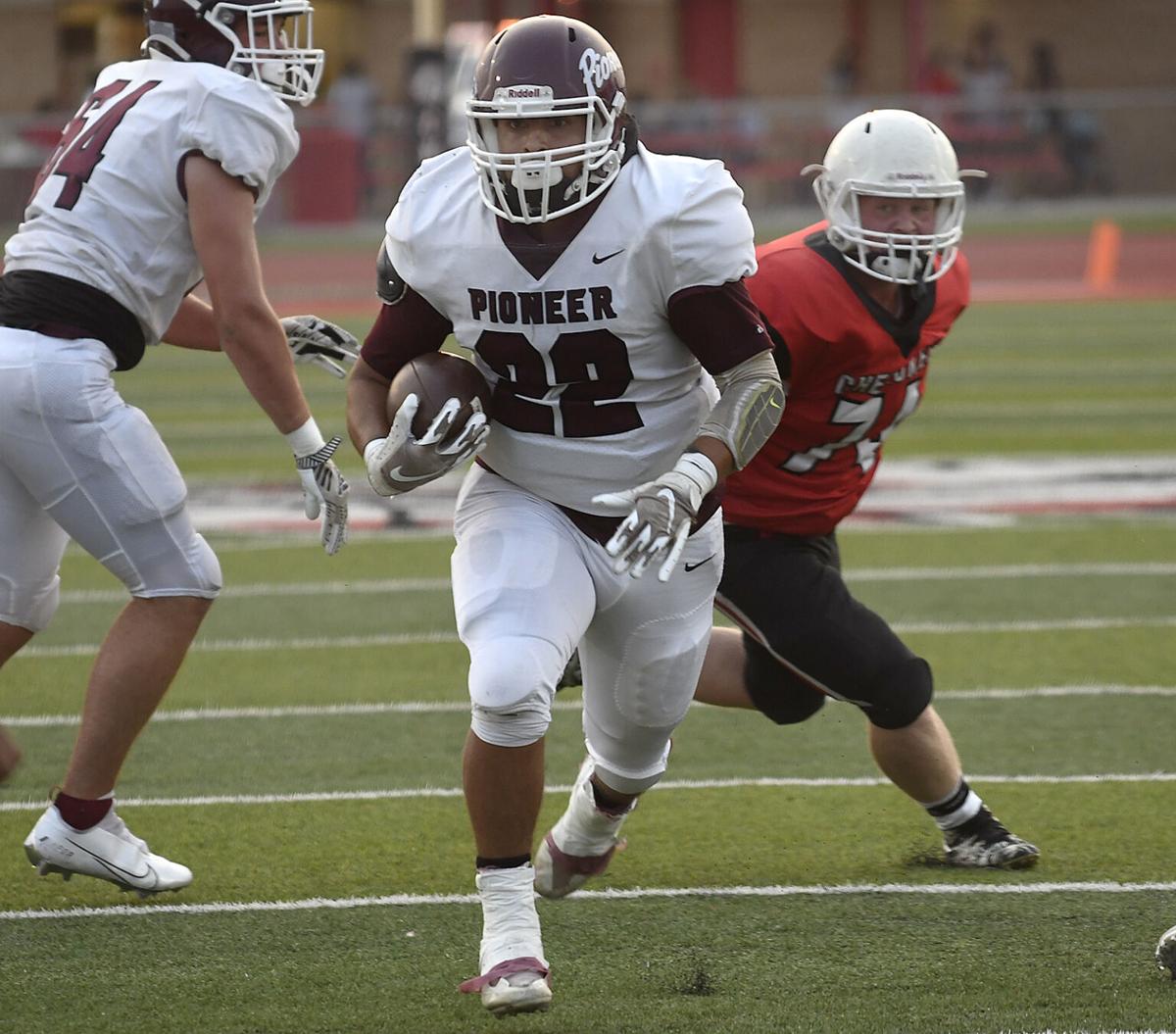 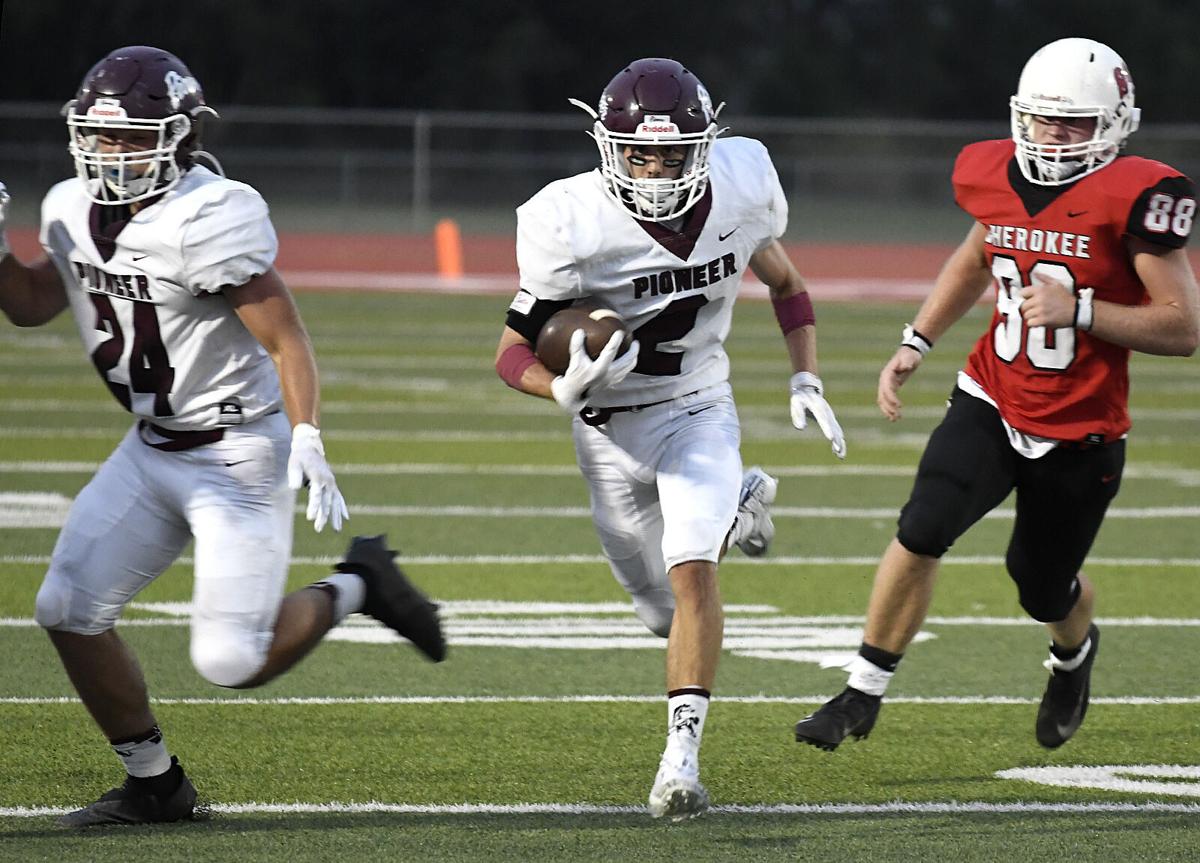 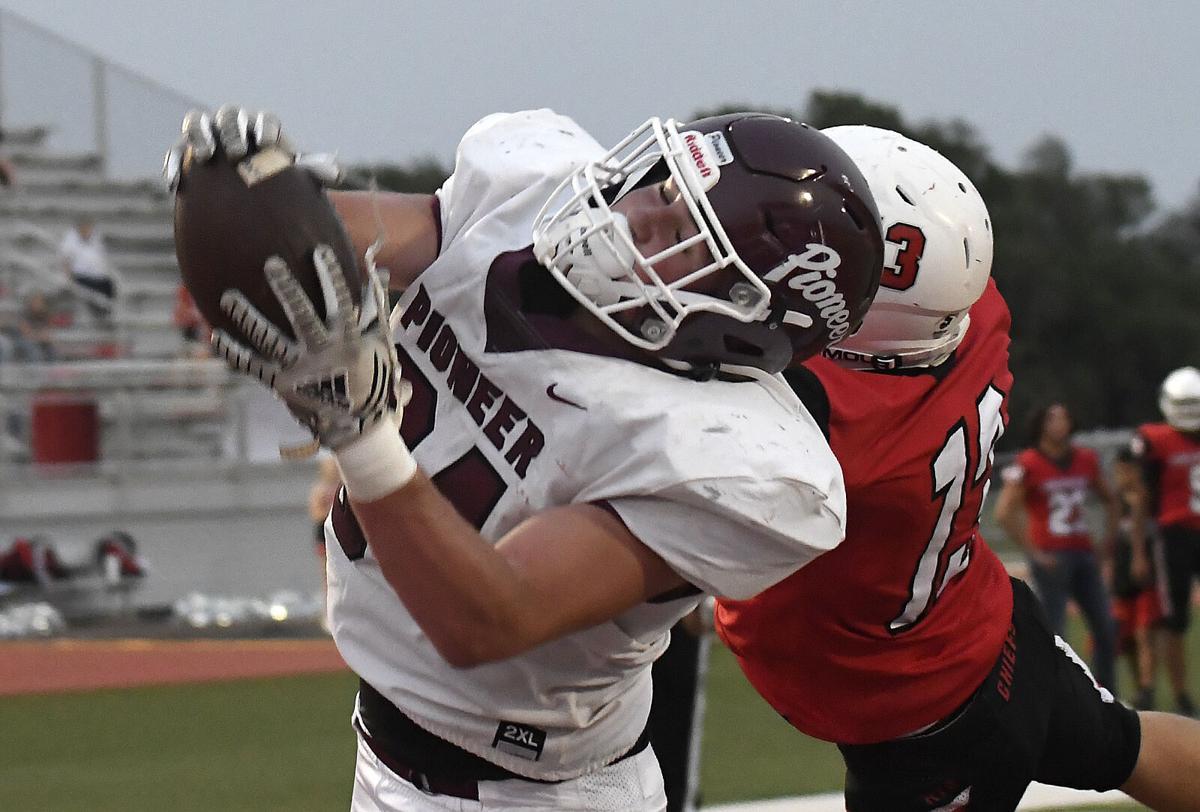 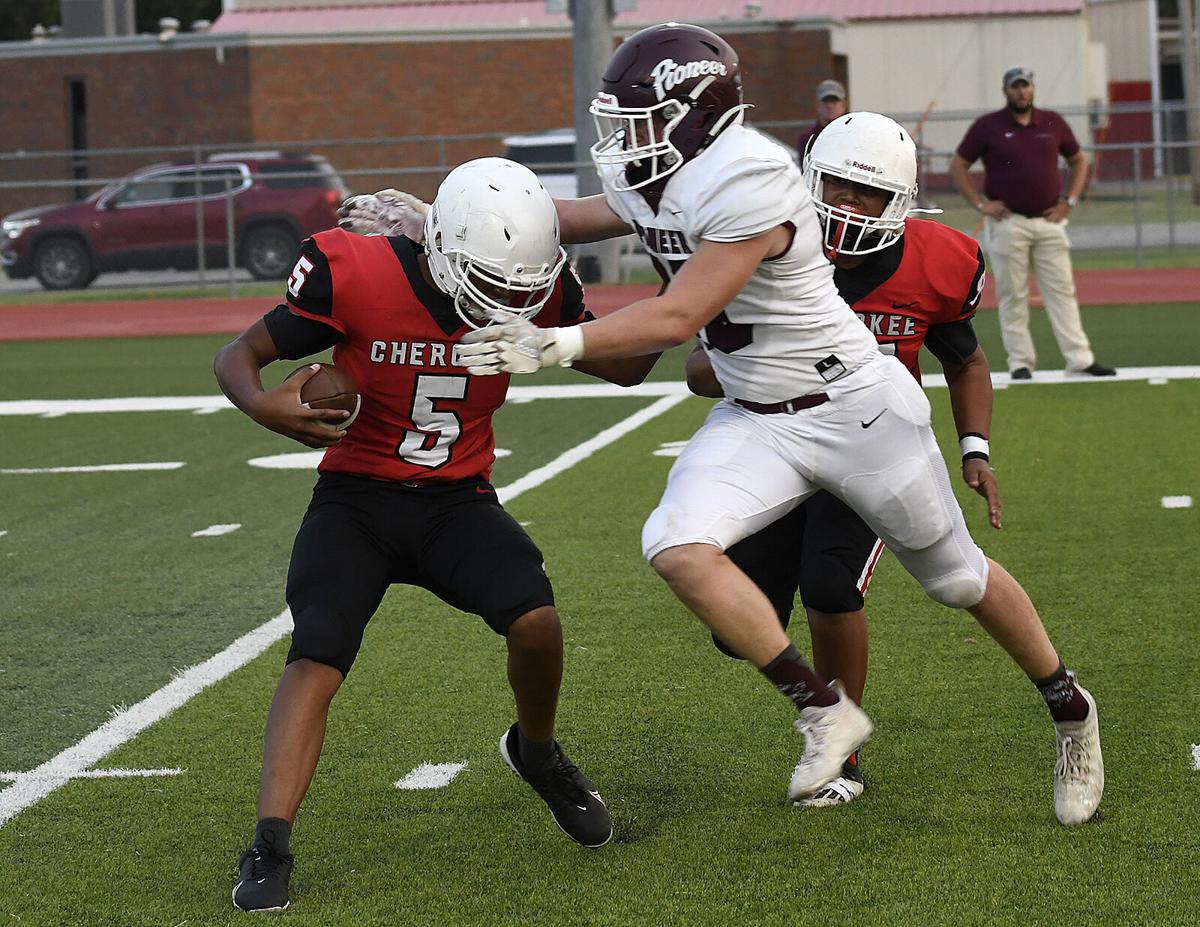 The two teams played with a running clock right before halftime, but with Pioneer holding a 40-0 lead going into the break, Humphries took the opening kickoff of the second half 85-yards for a score to end the game in a mercy-rule.

Cherokee was without three of their starters due to injury including starting quarterback Lake Lyon, who has already missed time last season due to an ACL injury. Pioneer was able to use their absences to its advantage by loading the box and keying-in on the Chiefs’ running backs.

Of the Mustangs’ six touchdowns against the Chiefs, four came on plays of 49 yards or longer. Humphries scored three of those, including runs of 58 yards and 53 yards. Both came on runs up the middle, and both times Humphries path to the endzone was clear before reaching the line of scrimmage.

Overstreet said the success the Mustangs had offensively was a total team effort from the fullbacks, to the tight ends, to the offensive line.

“Cherokee was bringing different guys, playing them in different holes, different gaps,” Overstreet said. “John Ridge, Erik Allatore and Cody Moody did a great job of picking up the slants, and knowing what they needed to do. I was really pleased with them.”

Humphries carried the ball seven times for 122 yards (17.4 yards per carry). Leyton Parker scored once through the air and once on the ground. Parker’s 19-yard touchdown pass to Dakota Wingo was the Mustangs lone passing attempt of the night.

Cherokee was held to 65 yards of total offense with 60 coming on the ground. Running back Kai McHenry led the way with 44 yards rushing on nine attempts (4.9 yards per carry).

Robert Newberg forced one of the Chiefs two fumbles after disrupting a handoff in the backfield, and got the fumble recovery.

Overstreet said that Newberg was “all over the field” on Friday.

“He’s a kid that kind of got banged up in the Coyle game a little bit, but just came back this week stronger and hungrier,” he said. “He does a really good job for us, calls the defense. When we need a play, he makes the play for us.”

Cherokee has an experienced squad, with its sights set on going on a playoff run. That goal is still well within reach, with two games before the team enters district play.

Overstreet said that even though the final score didn’t end up particularly close, the team still got a lot of valuable experience against a talented Class B school.

“Here’s the thing about Cherokee, they fought hard the whole time, they have really good players and they’re a well-coached team,” Overstreet said. “With three key players out for them … that makes a difference.”

The Mustangs snapped a two-game losing streak to the Chiefs with the win and improve to 28-15 all-time.

Masri is sports editor for the Enid News & Eagle.

Have a question about this story? Do you see something we missed? Do you have a story idea for Tarik? Send an email to tmasri@enidnews.com.