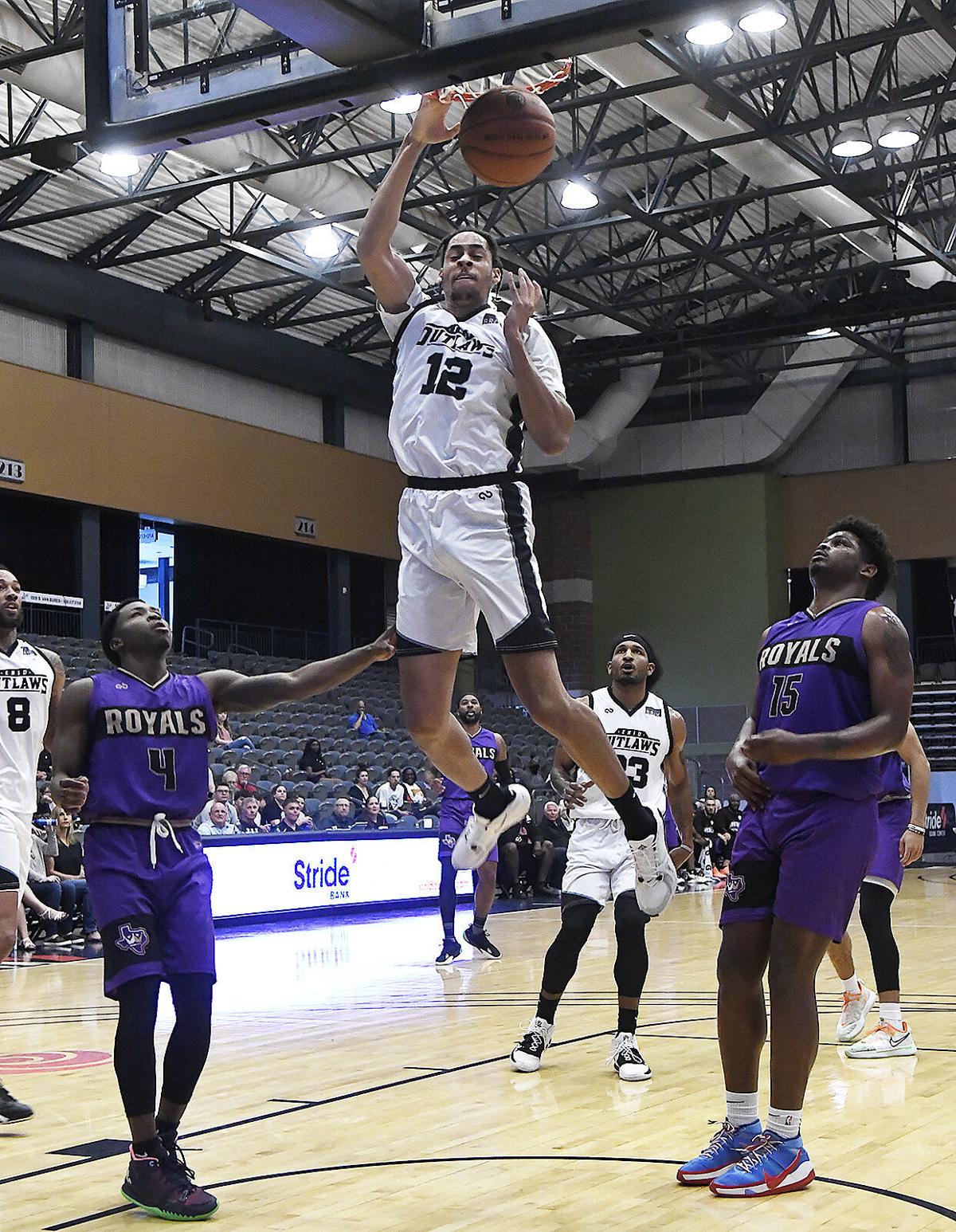 Enid Outlaws' Chance Comanche scores a dunk against the Waco Royals Sunday, May 2, 2021, at the Stride Bank Center. 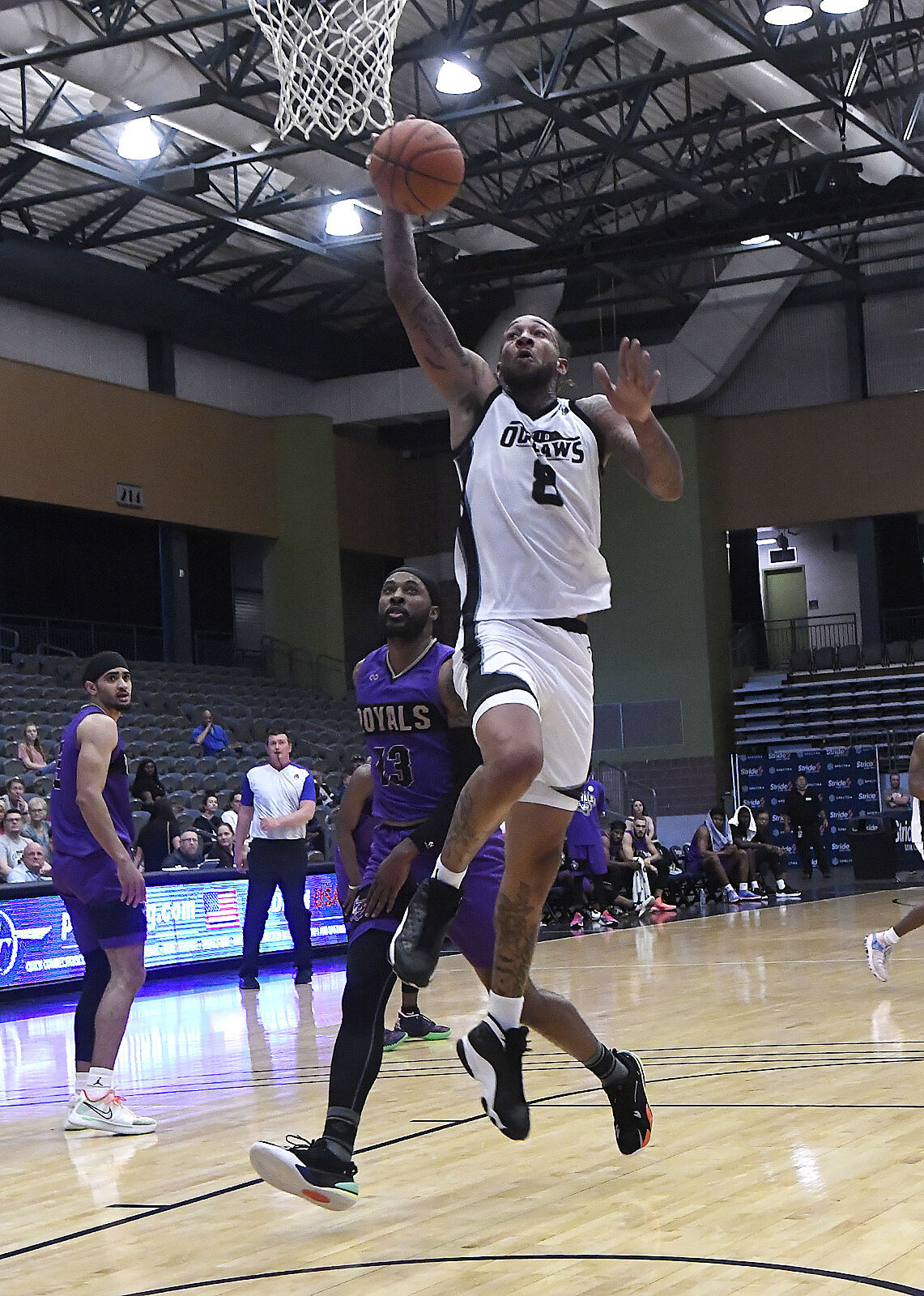 Enid Outlaws' Tavares Sledge goes up for a fast break basket against the Waco Royals Sunday, May 2, 2021, at the Stride Bank Center.

Enid Outlaws' Chance Comanche scores a dunk against the Waco Royals Sunday, May 2, 2021, at the Stride Bank Center.

Enid Outlaws' Tavares Sledge goes up for a fast break basket against the Waco Royals Sunday, May 2, 2021, at the Stride Bank Center.

ENID, Okla. — The Outlaws (8-0) continued their impressive start to their inaugural season on Sunday in a 161-80 win over the Waco Royals at the Stride Bank Center.

The Outlaws never let the outcome come into question, jumping out to a 9-0 run out of the gate, and took a 50-14 lead going into the second quarter. By halftime, they had extended their lead to over 50 points behind 19 first half points from Lindy Waters III.

“I challenged the team to get off to a great start,” Enid Outlaws head coach Ed Corporal said after the game. “We struggled in the first half last night (against Little Rock) and I wanted to make sure we were ready to go. I am proud of the job I guys did tonight. They were ready from the opening tip and never let down.”

The Outlaws have been putting on a show at home this season, scoring over 136 points in every game with the closest contest coming in a 136-125 Enid win. The team has also put up wins of 73 points (Midtown Prestige) and 74 points (Lewisville Leopards) to go along with Sunday’s 81-point win in just four games this season.

Enid has now played all but two of the eight other teams in the Central Conference, having not seen the No. 4 Shreveport Mavericks or the No. 5 Dallas Skyline. The Outlaws have outscored their six conference opponents this season by an average of 37 points and have scored 127 points per game.

Enid will only play against Central Conference opponents this season.

Waters had a breakout game against the Royals, scoring a season-high 33 points with just two misses on 13 attempts. Waters was eight-of-10 from behind the arc. Charlie Marquadt has continued to look impressive scoring 24 points and was six-of-eight from deep.

Wayne Runnels had 23 points without missing any of his eight shot attempts and Chance Comanche added 20 of his own. Seven of the 11 Outlaws listed on the roster scored in double figures in the game.

Enid will have another chance to put on a show in front of the home crowd on Saturday when the team welcomes Midtown Prestige to the Stride Bank Center at 6 p.m. The Outlaws will turn around and play another home game against the Houston Push on Sunday at 4 p.m.

Have a question about this story? Do you see something we missed? Do you have a story idea for News & Eagle sports? Send an email to tmasri@enidnews.com.